Sketch that I did when Yesenia & I went down to Cape May the week after Memorial Day.  My wife is a beautiful, sexy and very patient woman. 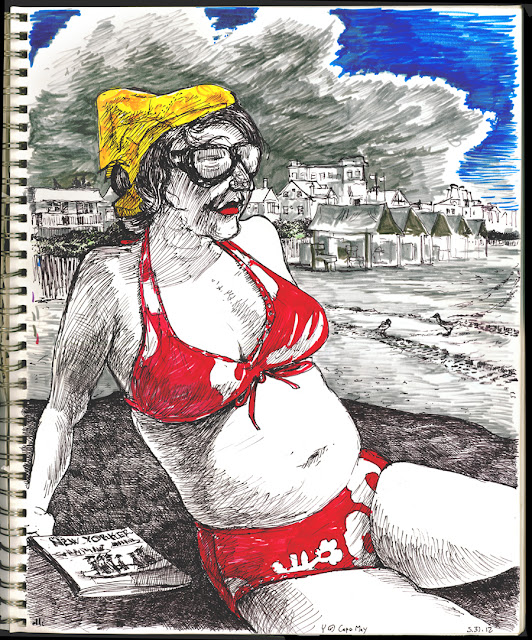 Posted by Dave Kopperman at 12:00 AM No comments:

What I Won't See

People keep asking me if I'm going to see Prometheus, Ridley Scott's new not-really-but-actually-yes prequel to Alien.  And I keep telling them that I won't.  There are a number of issues at play here, not least of which was that the original film was one of the taboo films of my childhood and established firmly that horror is not for me.

But now I'm an adult, and the type of horror that Scott dishes out is well within my tolerances.  So the real answer to the question of why I won't see Prometheus boils down to this: I think Scott is a lousy director.  He is simply not for me, and had made his way onto the list of directors whose films I avoid, simply because I know what he does and I don't think it's much good.

The main thing about his films is that they're astoundingly stupid.  Stylish and trying to talk about big issues, but talking about them in a brain-dead, half-drunk way, like a really handsome, well-dressed guy who got into college on a football scholarship taking his first Philosophy survey but only capable of processing the ideas as 'cool' on a stoner level.

Really, is there anyone out there that thinks Thelma & Lousie is an important feminist statement?  Or G.I. Jane?  It's quite telling that the lead player in most of Scott's films over the last decade has been professional belligerent manmeat Russel Crowe, a decent actor who clearly isn't nearly as deep as he desperately wants to be in real life.  Which is why he throws phones at people and threatens to beat up awards show producers who cut off his poetry reading.

There you go: an adult male who flies into a violent rage because he isn't allowed to finish reading a poem on a TV show in between the awards for best on-screen kiss and best sound editing.  That is pretty much the way I feel about Ridley Scott movies, in a nutshell.  When actual adults start making real science-fiction movies, maybe I'll go see them.  Until then, I'll stick with the kids films.  At least they know they're for kids.

Ahhhhh.  Today is the last day of a week's vacation that Yesenia and I took off together.  Nothing major - started with a nice party at the house (our first party party in over a year!) on Sunday, then a lovely breakfast with John and gf Johanna on Monday - they took advantage of the guest bedroom... well, guest office with air mattress.  Then mostly lazy stuff, with a nice trip down to Cape May and a stroll down the nicely uncrowded Ocean City boardwalk on the way back.  Perfect weather, no crowds - almost a science-fiction version of the Jersey Shore.

Friday began the actual recording of the much-anticipated (only by me, but still) lost Copper Man album, Americana.  This is the project that's going to occupy much of my summer and at least a few hours of the summer of as many musicians as I know who are willing to do it.  As usual, great drummers are easy for me to come by, but guitarists are thin on the ground.  Still, given the more stripped down sound I'm going for with this, I can handle all of the rhythm guitar work and bass, and hopefully be able to drop in the ringers strategically for the three or four songs that could really use that extra guitar polish.

As mentioned, as one half of the pair of great drummers, Sean trouped in and delivered three outstanding tracks.  This being the first time Sean was exposed to the direct Dave Kopperman arrangement process - a mixture of snarky comments and completely indecipherable directives - the fact that he was able to turn in such great performances even with me as an obstacle is nothing short of miraculous.

Three songs down, twenty to go.

Saturday, Yesenia and I took a shortish-longish drive up to Highland Mills to visit a winery, one of our more favorite types of day-killers.  As we stood at the bar in the shop, making our way through the tasting flight, Yesenia asked me (not unbidden) when I had become such a wine snob.

Well, I said, it was the one-two punch of our trips together to Napa and Mendoza.  Would she want me any other way?

She said no.  I wanted to follow up and ask her if she wanted me the way I already am, but I didn't feel like pressing my luck.

D.
Posted by Dave Kopperman at 8:31 PM No comments: