Noah had his NYC premiere of his autobiolytical jazz suite (which I keep typing as 'jazz sweet,' for some reason) Thursday night, and Yesenia and I caught the first of two performances that evening. Odd, the way language fails a little here - normally, when a band plays for an hour, takes a break, and plays another hour, I'd call those 'sets.' But since it's a single large piece they're playing, it seems more appropriate to use the term 'performance.'

Heck, it seems more appropriate to use the term 'ensemble' instead of 'band.' That's how authorial intent on the part of the artist colors the way the audience approaches a work. I'm also told that jazz musicians don't refer to cover versions as 'cover versions,' and that there probably isn't a term to use when Coltrane and company ripped up 'My Favorite Things.' Clearly, terminology is important in these areas, and one of the ways in which the merely interested are separated from the passionately involved. So Heaven help me as I try to write an analysis of the set/performance/suite/band/ensemble/septet - I promise that if I mess up a term that I'll make a donation to the Dizzy Gillespie Cancer Institute.*

Since authorial intent in this case was to present a suite of interlocking themes that (in his words), "...explores a journey through suffering, fear, determination, faith and, ultimately, transcendence and wholeness," a good part of listening was split left/right brain, trying to follow a narrative through wordless music while also trying to drink in the music in the moment. On the narrative front, the movements were titled in allegorical fashion, such as 'Warrior,' 'The Garden,' and 'The Path,' but in a piece this long and complex, it becomes difficult to keep track of just what movement you're in as a listener, so the overall journey becomes mostly emotional, untied from any specific meaning or image. Which meant that - with my emotions tied up in the composition, my intellect chose to be engaged by the act of performance, following the different musicians around and thinking about their choices and how they fit in with the overall piece.

The suite - named, as above, Know Thyself - ran about an hour, so I'm sure I misheard or misremembered some things. Plus, bear in mind that sometimes when you're listening in an abstract fashion, your brain will go where it wants. For starters, the stage at the club (the Jazz Gallery, located way downtown) was surrounded on three sides by crimson curtains, so half the time I expected to see Agent Cooper getting cryptic advice by a backwards-talking dwarf. So, anyway, that in mind, some...

- The suite began in a pleasantly random way - Noah had barely finished thanking the grant providers when the tenor sax player began to play some rolling lines. It segued so seamlessly out of the musicians little pre-show warming up gestures that for a few seconds, I thought it hadn't started officially. Like something caught out of the corner of the eye that you suddenly realize is what you'd been looking for.

- The septet was used as I'd hoped, effectively exploring the possibilities of smaller combos within the larger unit, and also allowing for instruments with varying coloration (such as the bowed section on the bass) to really give a very broad palette of sound with which to paint.

- Although the core band was Noah's trio, he didn't really treat it as a showcase for his own playing, with his one major piano solo (not counting section intros) coming fairly late in the suite but also not being the climactic moment. In fact, he took the risk of allowing himself to play parts on his melodica that deliberately clashed with the rest of the band, breaking up a lovely slow section (shades of Dolphy, complete with bowed bass, flute lead and the drummer moving over to xylophone) with harsh slashing lines in different tempo and key in unison with the vibes, to a pretty impressive effect. It takes a solid ego to be able to be the bandleader and be the one willing to make 'the bad sound' for the sake of the integrity of the piece.

- In fact, most of my favorite moments were the bits where things began to (deliberately) wobble off the axis. The first drum solo was one such case, where the drummer played awkward, stripped down patterns that pretty much found a new signature with each measure. Being the prog fool that I am, my other favorite moment was the movement that alternated measures of 7 and 8, which (I think) may have been the bed for the second vibe solo.

- A minor quibble with the Jazz Gallery's piano, which had a beautiful warm tone but less attack than I usually like - perhaps not 'attack,' but something that left a lot of Noah's playing sonically obscured behind the vibes and guitar, even where parts diverged. I definitely look forward to the album so I can dig apart the arrangement a little more.

- Speaking of unison playing: there's no denying that the tenor sax player was a great soloist, but a good part of the battle in acoustic music (any music) is the physical sound of the instrument, and tenor sax is the one that excites me the least among the assembled sounds on stage. I really appreciated its presence for the themes, however, as the classic tone of the tenor and alto playing lines in unison is hard to beat as a real 'signature' jazz sound. Thankfully, he swapped out for a soprano sax for a couple of movements, and I love the soprano.

- And speaking of instrumentation: as someone who deals largely with electric instruments, I'm drawn more to the way an instrument sounds than what the musician does with it. So the vibes player pretty much by default won the 'favorite soloist' award. By the same reckoning, the flautist (she was also an excellent sax player) 'brought it.' Not to take anything away from either of them as musicians - since both were excellent - but you've won a large part of the battle with me if you've got the sound. Apparently, I like vibes and flute. Who knew?

- Favorite moment: the drum fake out solo and big crowd-pleaser solo not a minute later. For contrast and context and blah, blah, blah, but let's face it: when the drummer is thundering out furious tom rolls so intense that the sticks rise over his head between each 64th note strike, well, that's my jazz equivalent of the money shot. ("John Bonham! John Henry Bonham!") All that was left out was rolling his stick down the ride, demonic face paint and magnesium flares. Maybe that's the point where the phrase 'Jazz Sweet' came into my head, because, you know, it was pretty sweet.

- I'm always a studier of the faces of musicians while they play - particularly drummers (although a great lead guitarist pucker - Dave Gilmour, for example: 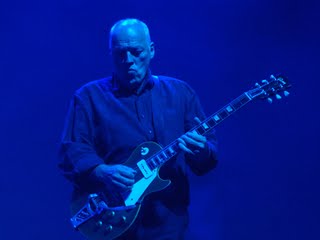 also makes me happy). But those drummers' faces? That range that goes from something that looks like complete boredom to intense, murderous rage? Man, I can't get enough of that. Someone needs to make a coffee table book (or a future Rambler entry). Vinnie the Drummer (man, how great a name is that?) wore a look of what I can only describe as 'doing involved linear equations with multiple variables in his head'** for the entire show, tongue pressed firmly between his lips and brow furrowed for the full hour as he looked from chart to kit to Noah and back again, clearly still mapping out the devious stops and starts in the piece but never (at least to my ear) missing a cue.

- The celebratory 6/8 (3/4?) major key finale ('Back to the Garden,' I believe), with the full band picking up a phrase that had appeared in sketchy elegiac form on solo instruments earlier in the piece - usually at a hinge between movements (my favorite of which was a mournful reading on guitar). The motif - a straightforward VII-IV-I (I think) change in (I think) Bb - as played by the full band really brought it all home nicely, sounding a bit like Alan Silvestri's theme for Back to the Future as fed through the Ben Folds Five... although it's possible Noah was referencing 'With a Little Help From My Friends,' which would have made more sense thematically, now that I think about it.

Anyway, all of the above should be taken as not remotely an educated view of the piece - my knowledge of extended thematic works in jazz pretty much begins and ends with A Love Supreme.*** It's more of a view of an outsider looking in, carrying with him the baggage of a million concept albums. Like the saying goes: when your only tool is a hammer, every problem looks like a nail. I guess in this case, the nail is Know Thyself, and the hammer is Thick as a Brick.

Still, even given my limited context for hearing such a piece, I was completely knocked over by it. I'm normally not a sucker for technique, but all the musicians in the band (particularly the core trio and the vibraphonist) had exactly the kind of humanity in their playing that gives the technique a reason to exist - which is to say, the ability to say what you mean. And Noah gave them something worth discussing.

*Seriously, I owe them, since they did treat my mother.

**This is a look I'm pretty familiar with, these days.

***And Mel Tormé's California Suite, if you're feeling charitable.
Posted by Dave Kopperman at 1:22 PM

you love the soprano sax? SO you're nmore a kenny G man and less Coltrane?

I figured that point needed clarification: it's more that I'm 'bored' with tenor, since it's been essentially the premiere lead instrument in jazz since the 1930's. I still love the old recordings, but with newer works I like to hear some other sounds explored.

I guess I have to say that as a ground rule, I like the smoother, clearer sound of the soprano over the rougher sound of the tenor, since I actually prefer Coltrane's soprano stuff to his tenor.

I like alto stuff and tenor stuff... soprano, all i can hear is kenny g..

Really? Because no matter how Godawful Kenny G's stuff is (and talk about an example of impressive technique married to zero soul), I'll always associate soprano sax with Coltrane's 'My Favorite Things.' Meaning, I guess, that if something is really awesome, it makes me forget the bad things.

Seriously, the live version of 'My Favorite Things' (from the 'Afro Blue Impressions' album) is pretty much the most awesomest performance by any group of musicians ever on anything.