Tonight's the big night - finishing up the big portrait. It's been nearly there for some time, now, but the Devil, the Angels and any other number of morally charged metaphysical concepts is in the details.  The subject keeps coming in and out of focus - a little bit of pigment there and the cheekbone sinks, the smile goes from beatific to snarky, the soul in the eyes starts to haze.  I knew this would be the case, as it's always the case, but I needed to go back in there and fix the nose, and I kept doing everything in my power to avoid it, but tonight, as noted...

At any rate, it's going about as well as I could hope, so I'll be able to move off the face in a couple of hours and get onto the final touch, being a wallpaper pattern made up of mathematical symbols chosen for their thematic weight and graphic interest.  That may be a little tricky, since I left the perspective somewhat vague, and the wallpaper patter will have to lock it down.

The other side, a traditional view out the window, had the benefit of basically falling onto a single receding plane without a really strict grid.  It fell together nice and quick, and it's the first part of the painting where I started carving in the detail.  Of course, the building that focuses the windowscape is far enough away that it should begin to get less distinct through atmospheric perspective, but one benefit of having chosen the Northern Renaissance as a style guide for this is that atmospheric perspective was a Southern invention, so leaving it out gives the work more of the feel I'm going for.

Although a final shot of the work will likely have to wait until the Fall - when I take a trip down to Kentucky to apply the varnish - here's a detail from the landscape, courtesy Karl, who was kind enough to shoot the piece at the 85% point.  The Schloss Marienberg, Wurzberg: 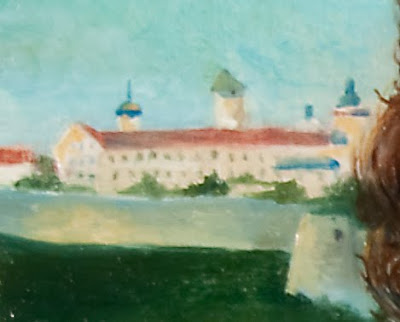