Beadboard Manor has always attracted hornets and wasps and yellowjackets and things like that. Things that attack mercilessly, in large numbers, and without apparent reason. Like all old houses, it also has a surfeit of spiders, but spiders don't attack you just because. Don't know what it is about the place. 90 years without a termite, but airborne aggressors, we get perennially.

The yellowjackets in the side yard are probably related to the same colony that I exterminated in '06, that had taken up residence in the dying tree in the front yard. That time, it only took one can of fogger upended in the bottom of the tree to make me a genocidist. This time, there's either too many or they're too far in to make any headway.

The first discovery of this new colony was back in mid-July, when I noticed a few piloting in and out of a series of holes in the side yard. The holes are the combined work of an old root system and some digging rodent kind of thing, and are fairly extensive. I'd put it on my list of things to deal with, and wasn't looking forward to having to do so.

So when I went out to mow the side yard last Wednesday afternoon, it was with more than a little trepidation. To their credit, the bugs stayed put until the mower was right over them - but then it was blitzkrieg. They swarmed out instantly, all over the mower. Since I knew exactly where the nest was, I was pushing it gingerly, ready to run like a Yankee stealing home. I didn't stay to watch - I took off around the back of the house at top speed, and didn't stop until I'd rounded the house and took up a vantage point on the front porch.

Sure enough, a Lesser Magellianic Cloud of yellowjackets was all over the mower, kicking metallic ass and taking names. They seemed to be taking turns - as soon as one was done, it would return to the underground nest, but another would immediately take its place.

I figured they'd work out that the mower wasn't a threat in and of itself (it shut off automatically as soon as I released the handle) and calm down enough for me to retrieve the mower and mow the front and back yards within a few minutes, so I went inside.

It became apparent that the swarm was now a permanent feature. I trudged over to the neighbor (who I'd already warned about the nest) to let him know that I was going to be bombing it that night, so he should get all of his seven (!) cats inside.

Yesenia came home after dark, and the nest had quieted down enough for me to roll away the mower. Then she and I went out to dinner, and when we got back I took a can of fogger and plugged the main nest entrance with it.

The next day, I went out to take a look. Hmm. Some sluggish looking yellowjackets were crawling in and out of the hole, around the can. That night, I bombed them again. The next day, the flying resumed, unabated. Apparently, I'd just given them a hangover.

Well, time for the professionals.

So, not only do we have a large yellowjacket colony living in - living under - the side yard, but as soon as the exterminator showed up today to give me an estimate, he found a gigantic hornet's nest lurking under the second story overhang, right near the bathroom window. And how did he find it? He looked up, which I guess is something I hadn't done in the last six weeks or so.

If I had, I couldn't have missed the thing - it's the size of a bowling ball. Ugh.

I'll see if I can get a picture of the thing for you, tomorrow. In the meantime, as proof of Beadboard Manor's history of pissy flying biting things, here's a photo of another hornet's nest from around the house: 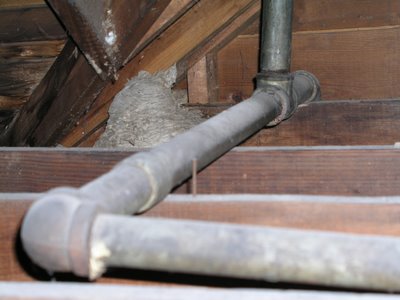 This one I found in the roof above the back porch while remodeling the bathroom. Pulled down the plaster and lathing and there it was. Thankfully, it was (I think) abandoned. But I duly bought a can of killer with 25 foot spray, drenched it and ran out of the bathroom and slammed the door.

I dragged my ass on most of that bathroom construction, but I'm pretty sure I put the concrete wall board up in record time.

Just wear your environment suit and don't make any sudden moves and you'll be safe. From Karl, that is. I don't know about the hornets.