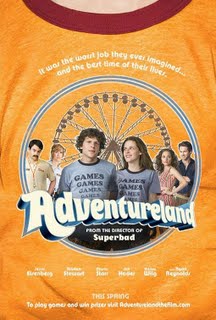 As the saying goes, this one got in under my radar. Not sure what I was expecting - probably something more along the lines of Superbad, which I seem to recall them marketing as having some connection to.* But I didn't much like Superbad, and I liked Adventureland quite a bit. It was small and quiet, with enough funny moments to keep it buoyant but never sacrificing an inherent believability. Well, Kristen Wiig and Bill Hader did their usual over the top and ungrounded bit, but they were a small part of the film and never actually interacted with the rest of the plot, so it was almost like they were vignettes from a different movie.

Not to oversell it, but if you like decent post-college change-of-life films, I recommend it. It avoids cliché, is briskly paced, well acted and nicely shot. Even the period stylings (it's set in 1987) are well done.

*Turns out the connection is the director, Greg Mottola.
Posted by Dave Kopperman at 10:11 PM

Weird, another friend of mine just asked me this weekend if I'd seen "Adventureland" (he and his girlfriend just watched it). This is two friend recommendations now, so maybe I'll Netflix it soon...

It's pretty strong. I realized after the fact that the central characters are supposed to be about four years older than me, which gives it an extra air of sweetness.