The Owl is Back

Owls don't migrate, do they? Because we have an owl in our neighborhood that seems to only be seasonal. It's really a wonderful thing when it's around - very comforting to hear the quiet hooting, off in some unspecified distance. Well, comforting if Kiko isn't outside; if she is, then I start to worry that she'll end up as owl chow.

Between the owl and my obsession with the mysterious mandarin* that appeared in Tappan Memorial Park last year, I'm starting to wonder if I might be an undiscovered birdwatcher? Undiscovered to myself, that is. It could also be that the local avian population has expanded in the last decade, so I'm simply responding to a change in my environment. Bear in mind that I grew up in this house, so I have close to forty years worth of observation on the types of bird life that you find around here. And I can tell you - it's changed. We didn't used to have cardinals or blue jays, and now they're all over the place. Ditto the owl - never one of those when I was a kid.

What did we have back in the 70's? Pigeons. That was pretty much the beginning and end of the variety. I remember visiting the zoo at Bear Mountain and seeing what they considered to be local birds, and being surprised because I'd never seen one (nor would I ever). Maybe that's because I didn't spend enough time in marshes?

Anyway, I'm loving the owl, the hoot of which - even if it's not a migratory bird - signals the arrival of autumn. He'll keep calling until winter settles in.

*Maybe I've never blogged about the mandarin: for some reason, a lone member of an extravagant-looking duck species turned up in the park. Thankfully, the park is behind the library, so I was able to run in and look it up. Damn thing wasn't listed in five out of the six 'Birds of North America" books they had. But one small, unexplained illustration matched in, in a section called 'exotics.' Apparently, the thing is native to Asia, and there's a population of only about 20,000 of them. The best explanation I could come up with is that someone had brought it as a pet and it escaped. It tries to both befriend and dominate the local duck population, but it seems like they don't want anything to do with it. 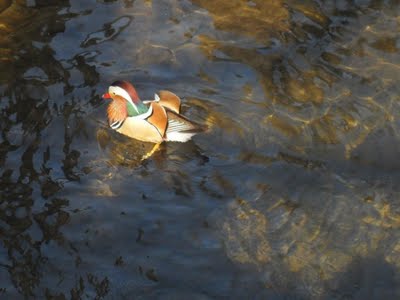 Beautiful, no?
Posted by Dave Kopperman at 11:45 PM

I spotted the occasional cardinal and blue jay in Tappan as a kid, and remember an occasional owl... perhaps you're just paying more attention now?

One thing that HAS changed: the deer. Growing up I'd only occasionally see them when driving on the Palisades at night. Now they hang out in my parents' neighbors' yard all the time. Not sure if it's a general Tappan thing now but I do know they loooove Knutsen Knoll.

Bear in mind: You were a kid ten years after I was a kid. In the 70's, the pretty birds were few and far between.

I guess they all waited for the 80s. I don't remember ever seeing pigeons around there either - sparrows and robins, mostly, as I recall.

Yeah, "Pigeons" was an exaggeration/joke. I meant that the local bird population was as prosaic as they come - as you noted. Sparrows and robins are fine, they're just not... boss.