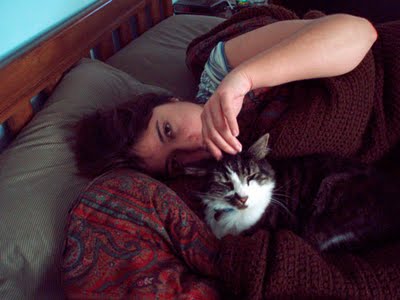 I'm not even going to pretend I have the strength for this afternoon. At 4 pm, I'm taking beloved cat Kiko to the vet to be euthanized. As it turns out, it's not the kind of thing you can prepare for - it's just the type of thing you have to go and do. In a way, I've either been blessed or led a sheltered life thus far, because this is the first time I've ever had to do anything like this - both make the decision to end her life and be the one to take her for it.

It is a kindness, I know, but the problem with animals is that they never see it that way. Kiko has always been a stress-case when it comes to visits to the vet, more so than any other cat we've ever had, and the thing I most hate to think of is that she's going to spend her last moments deeply stressed and anxious on the car ride and in the office itself. But her condition now is such that yesterday, I even wished that the vet could take her earlier. Not for my sake, for Kiko's.

The one relief from the feeling of guilt is knowing that Kiko - like a lot of animals - is (was) an eternal optimist. Sure, bad stuff has happened to her; trips to the vet, having a paw stepped on, having to deal with large crowds in her house, having to share space with other cats. But she never failed to forgive, and she always had faith that if she was fed once under a certain circumstance, then she could always be fed again when those circumstances recurred. But more, she always seemed to have faith in Yesenia and me, and the trusting faith of an animal is just a wonderful thing.

Whenever the vet would send cards to remind us to call for an appointment, the message at the top read 'Kiko loves you,' with the 'loves you' printed in and the name handwritten over a line (________________), making for a silly and insincere looking statement. But the thing is, I always believed it - the only people Kiko ever really bonded herself to were me and Yesenia, with all others viewed either at best as inconveniences who would occasionally feed her, or at worst objects of disdain.

Thankfully, it turns out that Yesenia is going to join me for this. Thankfully for me, at least. I guess the sight of two adults weeping in a veterinarians office says something about who we are as people, but the truth is that the core of ourselves as a couple - our favorite, most relaxed moments - were lying in bed, watching a movie, with Kiko there curled up next to one or the other of us (or smack between us). If I write as if we were losing a member of our very small family, it's because we are.

What a beautiful and heartfelt eulogy. Kiko was one of my favorite cats - some cats are especially sweet to dog people, just to confuse us, and Kiko was one of those. She will be missed by many, including me.

Yeah.. The worst part about the whole thing is how unconditionally loving and trusting pets are.. I understand your loss.. but Dave, don't get overcome by this.. You mentioned it in your eulogy.. this is the first time youve had to do this.. Part of being an adult is doing things like this.. and it's not just pets.. it's people as well.. there will come a time when the ante will be upped.. People get through it, because thats what people do.. you will carry the scars, but you will act.. the instinct will kick in and you will get through with what you have to get through.. She will just go to sleep... it's not painful.. it's her time.. every animal has their date due.. Keep her ashes... put them somewhere meaningful in the house so that she will always be with you..

Yeah, it really sucks when you have to say goodbye to pets, let alone actually take them to the vet to do it. I've had to do it 5 times in my life (say goodbye, not actually take them) and it is never easy. But Ansley makes a good point. Maybe it's easier during this time of year? With more interactions with friends and relatives? Anyway sorry to hear the news. Try to have a good holiday.

Were gonna get DRUNK New years...

Turns out that she couldn't make it to this afternoon - passed away just about half an hour ago, on the platform trying to get down to the basement. The good news is that even though the last couple of days were rough for her, the end came very, very quickly when it did and she didn't suffer unduly - and although she died (as most animals do) in pain and fear, at least she didn't have to endure that interminable car ride and that cold table.

The bad news is that she had to suffer at all, but human hope is a weakness sometimes, and even as of Monday it seemed as though she was really improving. Again, I hope that she would have forgiven me for this weakness.

I've dug the grave right next to the rose bush in the side yard and wrapped her in a 'chair towel' (towel that we would lay on a chair she particularly enjoyed covering in fur). Also put in a couple of her favorite toys - appropriately enough, a tiny catnip Santa and a little mouse elf with a jingle hat.

I know I'm just stalling now before putting her in the Earth, but will go out in the next twenty minutes or so.

I suppose it's sacrilegious to say Kaddish over a cat? I don't care.

I'll be part of your Minyan...