He's Not Your Pal 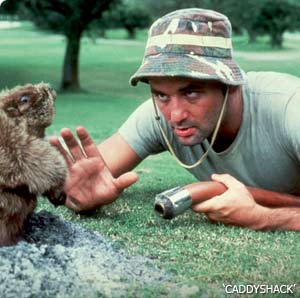 I'm starting to wonder a little bit about the free pass that our generation has given to Bill Murray. Apparently, an avuncular screen presence in a chunk of good movies now means that we love you unconditionally. Despite the fact that it's pretty clear that easygoing, melancholic, funny guy we think we know is a complete and total projection. Well, maybe the melancholy is real.

Behind all that, I think Murray is a vain guy awash in self-loathing, and like a lot of people of that temperament, he takes it out on those around him.

Think about it; he did Ghostbusters to get Columbia to support his dramatic turn in The Razor's Edge. Then when the latter film tanked but the first cemented his status as a comedic leading man, rather than celebrate having been a part of a real cultural touchstone and true comedy (and cinematic) classic, he went off to study at the Sorbonne for four years, licking his wounds in defeat.

Are we clear on this? The guy who came to fame playing a lounge singer on late night television, a goofy camp counselor and a brain damaged groundskeeper who blows up a golf course while Wile E. Coyote-style trying to kill a gopher got pissy that his first attempt at a serious leading man role - in an adaptation of a W. Somerset Maugham novel about a WWI layabout who experiences spiritual enlightenment in India, no less - wasn't a smash hit.

Of course, years later, when he did start to receive the critical acclaim as a serious actor that he always pretty clearly thought he deserved, it did nothing to improve his lousy sense of self. He famously looked as though he was going to cry when the cameras cut to him at the 2004 Academy Awards right when the best actor winner was announced and it wasn't him.

And he kept taking out his sense of failure on those around him - stories are rampant of feuds he's had on set when he doesn't feel that the other performers are working up to his standards. Here's a hint, Bill: don't sign on to a film with Lucy Liu and expect Lawrence Olivier in drag to show up opposite you. Collect the paycheck and understand that a movie update of a show about three women who solve crimes in bikinis is not the place to find 'timeless comedic grace,' or whatever the hell it is you think you're looking for.

The deep irony in all this - and one that may be lost on him - is that Murray owes all of his later career success as a sad clown to directors who grew up loving him as, yes, a lounge singer, a goofy camp counselor and a brain-damaged groundskeeper. Not to mention a guy who catches ghosts with a portable nuclear accelerator.

Worst, and saddest, of all is the fact that when his wife of ten years - whom he married after cheating on his first wife with - filed for divorce in 2008, she cited domestic violence as the reason.

Seriously. What does it say about us as a generation that this self-important emotionally distant asshole control-freak sad clown vortex of egotistical solipsistic self-loathing is our beloved icon? Nothing good, I fear.

(Of course I'll go see Ghostbusters III.)
Posted by Dave Kopperman at 4:41 AM

About 3 years ago while we were waiting to be seated at a P.F. Chang's in White Plains, of all places, my then 3 year-old son ran into him. Seriously, "he was pacing around like little boys do" and did a face-plant into Bill's (yeah, I call him Bill) knees. At that moment, it looked like Bill was about to spit on my son...

That, when combined with my indifference to "Lost in Translation" makes me agree with you.

But I love "Scrooged."

Yeah - I generally enjoy him onscreen. I hadn't meant for this to be as much of a Murray takedown than a meditation on why some celebrities get away with stuff and others don't, and why Murray specifically is such an icon to our generation. Of course, I would have to have included those ideas in the blog itself in order for that to be apparent.