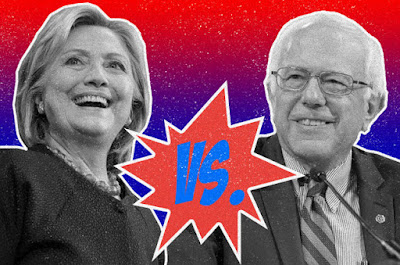 I've been crafting this post in my mind for quite a while - back to February, at least, when it became clear that Bernie Sanders had a serious chance at taking the nomination and that Trump did as well.  At that point, my Facebook feed was relatively mute on Trump, but the Sanders phenomenon came on (to my eyes) suddenly, and was swiftly pushed to the top of my feed by a pretty staggering amount of anger from my Facebook friends on the left directed at Hillary Clinton.  I think it was safe to say that I was blindsided by that.  Blindsided, at first, then alarmed, and then feeling like I was being personally attacked.  I was pretty careful not to wade into any debates at the time (the first rule of political fight club is not to join political fight club), mostly because I found the anger deeply off-putting, and not simply because it was anger directed against my own candidate of choice.

As you can imagine, given the long gestation period of this blog, what was originally going to be a pretty straightforward Facebook post kept on building mentally into this massive, complex kludge of an essay, with wispy little truth bombs that detonated one after another in my head, flashing brightly and then promptly distorted and obscured by the next one.  I couldn't wrap it up neatly in my internal dialogue under one pretty, snarky bow, and it felt shoddy of me to waste anyone's time if I didn't have anything salient to say.  The observation that people were/are angry is hardly an original one, and anger plus politics is pretty much the foul-tasting Reese's Peanut Butter Cup of democracy - two shitty tastes that taste shitty together, but we end up bogarting both cups that come in the pack in a single sitting, anyway.

But the clear difference between this year and previous elections was that it seemed like the anger came first.  Anger is putting it mildly.  The special flavor of the 2016 election cycle is inchoate rage, in a tangy smugness sauce.

I know what living with anger is like, so I recognize it when I see it.  Formless anger has been an underpinning of my existence since childhood, and when I started to take medication to bring my testosterone levels up a few years back, my low-lying, largely under control anger surged inside me to what I can only describe as Anakin Skywalker levels.  It was fairly fascinating to be able to examine it happening with a certain intellectual dispassion, while simultaneously totally alarming to be powerless to do anything more than ride it out when it spiked.  I became (well, became more) moody, blame-filled, and resentful, and found myself lashing out at the merest provocation.  My previously thin skin denuded into cellophane, giving everyone a good look at my boiling insides before fogging over again.

The point is, anger is not your friend.  Anger wants you to attack first and ask questions later.  Anger is not your trusted advisor, and especially not something that should be a foundational part of one's decision-making process.  Have you ever made a decision based in anger that you looked back upon once the red tide had subsided and thought, yes, absolutely, that was the correct and moral choice and I in no way regret any aspect of it?  If so, the next time you buy a car, instead of methodical research and test driving, why not just storm onto the lot at a random dealership (wearing the official uniform of the hissy fit: plaid pajamas, a stained bathrobe, and one single slipper) and blindly tear off in the loudest car possible, hurling a crumpled wad of sweaty Benjamins in the salesperson's face through the rear window as you Hooper away?  Rest assured you will be satisfied with your choice, nodding with righteous satisfaction as you sink into the bay because the steering and brakes went out on a particularly tight and scenic cliffside turn.

I started to feel the need to write my own answer to the question that no-one seemed to be asking - that is, "Why do I support Hillary Clinton as the Democratic Nominee?"  And I suspect the reason no-one was asking - especially not those whose motivation for supporting Bernie was that fun-sized anger - is because they'd already made up their minds that anyone who would in good conscience vote for Hillary was (say it with me, now) a shill.

I'd characterize the anger on both the left and the right - the feeling that assures you with absolute conviction that Hillary Clinton is evil and corrupt (words which turned up with alarming frequency in my feed) - as arational.  And I don't mean 'irrational' as in 'crazypants,' I mean it literally: the feeling that Hillary Clinton is evil is not based on a carefully reasoned and analytical response to available evidence. People may hold valid and rational reasons for their anger, but in many, the anger came first, followed by the careful subconscious construction of a rationale, a narrative that people have created to justify it.  Of course, this leads to a particular form of fuzzy logic that's more akin to mental rickets, a kind of Objectivist A=A for the far left.  I know of no other reason to explain why when I look at Hillary Clinton and see a charmingly dorky policy wonk with an unfortunate (but understandable) guardedness, others see a machiavellian manipulator with no recognizable human traits other than greed and pure self-interest.  She's the living rorschach blot, and I hear that Jackie Earle Haley is practicing his evil Hillary laugh in the mirror.

I'm not going to indulge in discussing any of the clearly, baldly (one might say, brazenly) open sexism that fed into the anti-Hillary narrative on the left.  Bernie Bros were a real thing, and the response of some supporters at the DNC not only underlines that fact, but crosses the t's and dots the i's with shaky little hearts.  I'll only say this about that aspect of the anti-Hillary brigade: if I, as a straight white middle-aged male with plenty of my own sexist opinions found it deeply off-putting, I can only imagine how disgusting and perhaps even a little frightening it must have been to be a female Hillary supporter exposed to that.  One telling aspect of the primary season was that female Clinton supporters, particularly younger millennials, were mum about their support for a candidate with record unpopularity levels among their peers.

But that's enough of the psych evaluation of people who I ain't.  Why, exactly, did I cast my vote for Hillary Clinton in the New York primary?  The pulse-pounding answer can be found in part 2, coming soon to a Rambler near you.
Posted by Dave Kopperman at 7:20 PM