Again with the Classic 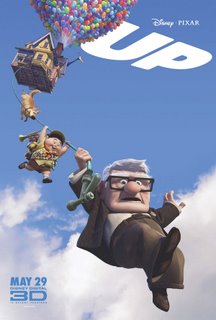 Saw Up tonight, at the Port Chester AMC (with Karl & Yesenia). And what can I say? With the partial exception of Cars, Pixar is still just ringing up the the seamless, entertaining works of art. I don't think there's been a run like this in the history of cinema since Disney's original run of animated features from 1939 to - oh, let's say 1960. That's twenty years and about 15 movies - and Pixar's coming close on their heels, with ten films in fifteen years. With their pace now of a film a year, unless they really fuck it up and accidentally produce a Dreamworks script, they might actually beat the Disney run.

It's not to say that Lasseter and the Pixar team have done everything seamlessly. I have no idea what they were thinking letting Chris Sanders go - Sanders is surely one of the great animation directors working today. Sanders, to me, combines the best of a lot of different iconic animators - shades of Ralph Bakshi and John Kricfalusi fuel his work, but he manages a timelessness that eluded both of those directors. Sanders is easily in Brad Bird's league, and it's foolhardy to squander and alienate talent of that order, despite the roster of big guns that Pixar has (Pete Docter, Bird and Andrew Stanton really know their stuff, and even if Lasseter is no longer top-tier in terms of directing chops, it's clear that he knows how to pick and shepherd projects).

Anyhow, Up is yet more fuel for my inevitable Blu-Ray purchase, so the economy better hurry up and recover so that I can justify spending my money on crap that I can't afford, again.

P.S.: Here - another Sanders link: a comic called Kiskaloo that I was ignorant of until about five minutes ago. I haven't read it, but that drawing sure is nice - and it proves once again that the level of talent out there doing webcomics is pretty scary. Note: The site navigation is pretty lame. The link goes to the first (I believe) strip, so click 'next' at the top to read through them.
Posted by Dave Kopperman at 11:49 PM

I'd heard warnings that there were sad bits, and I was prepared as to what the sad bits were... but holy crap did I cry buckets. Not at all newlywed-safe. I don't know if I've ever held Greg's hand tighter.

Fabulous movie though. Did you see it in 3D? As with Coraline, I sincerely hope there is a 3D DVD option (perhaps it would come with a few sets of glasses?)... unlikely though. *sigh*

Did not see Up yet--I don't see many movies in the theatre anymore--but will definitely catch it on DVD.
I actually liked Cars--it's Finding Nemo that I'm not crazy about...
About Kiskaloo--yeah, it's really great stuff. I like this one in particular:
http://kiskaloo.com/wp-content/uploads/2008/09/2008-9-215.png