Mr. Comic with Dave and David 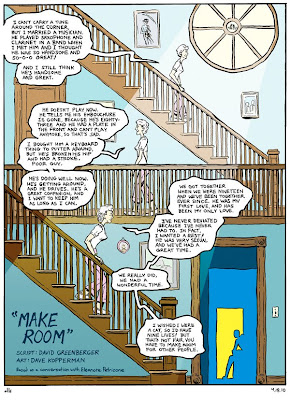 The second comic with David Greenberger of Duplex Planet fame. The original sketch (below) shows just how much I rely on black and hatching to get my effects. Both Greenberger and I agreed that it was way too gloomy that way - so I settled on trying to make it as positive as possible. Which meant no hatching and no solid blacks, and open space with primary colors.

Since the scripts come dialogue-only, I've decided to use the strips as a platform for pushing myself into different areas. This time around, the experiment wasn't so much playing around with the whole time/space mash-up that comics allows, but in trying to dispense with any pen and ink trickery and in going for a Hergé-inspired ligne claire piece.

Which is to say: contours with no differentiating weights, no crosshatching or any other pen shading effects, and flat colors with no real hierarchy - - which is what the emotional tone of Eleanore's speech seems to call for. 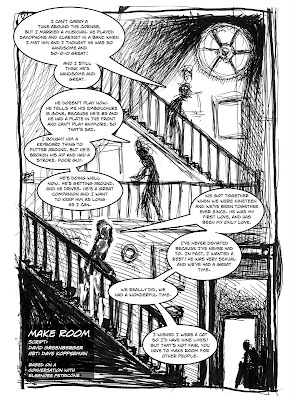 I didn't get there, of course. It's a style that many great cartoonists have pursued without much luck, and these are people who worship the Hergé school. I'm largely ignorant of it, so to do a perfect version on the first try would be something, no?

For starters, I realized about ten minutes into the inking phase that to really do things right, I'd need a mechanical pen. And I somehow don't have one, anymore. Weird, because the Rapidograph was my primary tool for the better part of my teen years, and I always kept a functional one around for clean up and panel borders long after I switched to dip pens.

For those not steeped in comics inking issues: dip pens have a nib that flexes while you draw - meaning that the line weight alters with the amount of pressure you apply, and how much ink is on the nib. A Rapidograph delivers a fixed-width line and has a constant ink flow. Both tools have their uses, but as I've moved even from nibs to brush inking, my need for a Rapidograph has declined sharply over the years.

Mostly, the Rapidograph is a architect's and draughtsman's tool, and with the exception of the ligne claire style, it has no use in comics. It's a dead line, and most comics need a living one. But given how lumpy all of my architectural details came out in this piece, I sure could have used one.

The other issue was with color, which is always a spooky voodoo area for me. I realize that the colors are a cheat here - even leaving aside the gradient sunbeam, I just lack the experience to trust myself to use no color clues as to the depth of the space. A true ligne claire artist would be able to use one single tone for the entire wall, and it would work. For me, it just looked like a giant lump of blue. So I treated the space as four layers, and darkened each layer as it moved towards the viewer in space by about fifteen percent.

I did resist the urge to do any highlights or lowlights, usually a big crutch for me, and I guess I'll be happy to accept the bronze medal for that. Two out of three.

I realized after the fact that - although I don't have any Hergé in my influences, a strong hint of Bil Keane, of all people, came into play. Also a cartoonist who used flat color and simple linework very effectively (although Keane was a brush man, a trait I've picked up), and who did may strips that featured one character in multiple places over single backdrop. The main character here also owes a debt to Keane's Thel, the bosomy yet rail-thin mother from The Family Circus.

Here's a look at the blue pencil grid. 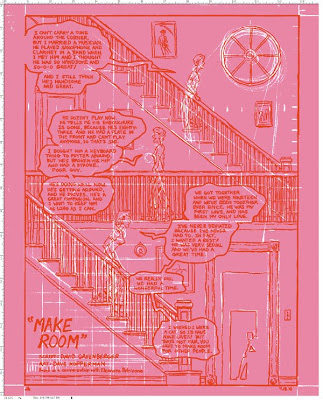 Can I tell you what a pain it was making sure all the steps, rails and risers were spaced out properly?  Those math classes are starting to pay off!

when are you gonna do a goddamn graphic novel with that drawing talent?

Thanks. I've been gun-shy, given the complete mess that 'Sister' turned into. But I think I've learned from that - write a full script and thumbnail the thing out in advance. 'Sister' was done Marvel-style, with only a (very sketchy) plot in advance and dialogue written after the page was drawn. Sheer laziness on my part.

I do have some ideas, all I really need is the time and the incentive and, really, some support/competition. To that end, I want to start a monthly salon with all the cartoonists I know. Not so much as a collective as a get-together (somewhere in NYC, presumably on a weeknight) where the goal is just to sit down with like-minded friends and draw. The names I've come up with so far are you, Bran, John, Dave and Sarah. At this point, you know more cartoonists than I do, but I think the rest are already part of such things.

I should say that Sarah, Dave and John are all deeply non-committal on the subject, but I'm going to keep applying pressure. Seriously: if you don't have one night a month just to hang out and draw, why fucking bother?

This is really impressive and intense. Keep up the good work!

Thanks - I was kind of thinking this piece wasn't successful, but it's been getting a lot of positive feedback. Greenberger and the editor were both highly effusive. I need to put it down for a couple of days and come to it with fresh eyes, because it's likely that I'm seeing it almost as a cheat - there was so little actually drawing involved (although there was plenty of work) that I never quite connected to it the way I usually do.

Also, it came out looking almost exactly like I'd originally pictured it, which is incredibly rare, for me - but it also meant there wasn't that thrill/fear of incipient failure that sometimes lurks behind making art.