Raiders of the Lost Art, Part IV
Update: Marina's portfolio, which looked like it might have been found, has now been unfound, presumably in a permanent way. So she's on the scramble to get something together for her early admission review to F.I.T. Everybody who reads the Rambler is now charged to vibe positive vibes in her general direction.

Well, the Apple IIc was a great computer for its time, no doubt about it. But graphics capabilities in home computing were growing by leaps and bounds, and within a very short span, the IIc's meager 16 color capacity and 140 x 192 resolution clearly wasn't going to cut it. As with any tool, I'd learned a few tricks to get around the limitations - hey, when you use the spray paint tool with grey over a solid green backdrop in Dazzle Draw, some glitch makes it look like a field of yellow daisies! - but limitations are only energizing as long as you're unaware of any other options.

(When I get the gallery section on the main site set up, I'll make a point to dig out some of my old Apple artwork and post it in a Juvenilia Gallery there. It would make sense to use it to illustrate this reminiscence, but it's all buried in a file cabinet in the basement, and really am not in the mood to dig it out now. When I actually get around to sorting that stuff 0 presumably as part of the general basement clean-up, I'll make a pile of stuff to scan. The more embarrassing, the better.)

But the Second Wave of Home Computing rolled right along. In an issue of Electronic Games, I came across a short blurb about the forthcoming Commodore Amiga, and the screen cap that accompanied the article broke my brain a little. 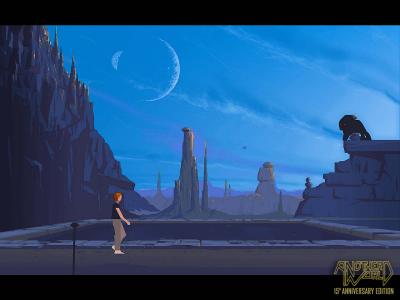 Compare that to this game from other platforms at the time: 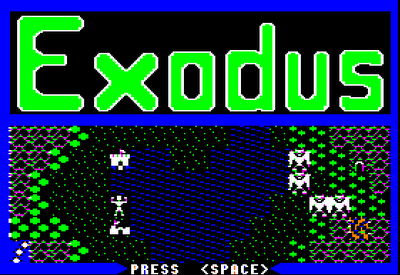 Sure, maybe this comparison is a little skewed, but you get the idea of how it felt. The world grew dark before my eyes and I fell instantly out of love with the IIc. Amiga! 4096 colors! 640 x 512 resolution! This was the computer that really kick-started the use of computers in video use, and even ten years after its demise, you can still save files in Amiga format in Photoshop. I don't think anyone would argue seriously the point that Amiga set the pace for graphics in home computing, and much of what followed sprung from a need to compete with that very high standard.

It had a very high price to go along with that standrad - the Amiga 1000 base configuration went for $1,295 in 1985, and that was way more money than I had on my own, and much, much more than I could argue my dad out of. In fact, I don't recall even trying, since I'd had the IIc for less than a year, and that had been a pretty major expense. So I probably just hung my shoulders in resignation to my 16-color handicapper of an artbot.

It must be noted that at that point, no-one at the consumer level really knew anything about how fast computers were improving, or would continue to improve, and drop in price, and all that. Now, it seems like common knowledge that the computer you buy today will be made obsolete by the next model three months later, with double the processing power and all that. But back in 1985 - and bear in mind that we're talking about a time of rapid flux in the industry, the days before WIndows, when Mac itself was only a year old and not exactly a graphic powerhouse (still only black and white at this point!) - many, many companies had a valid claim to being able to be the market leader.

Commodore had been a big deal with the Vic20 and the C-64, so it was a major scary moment to see the Amiga in action and then look over at my IIc with the sinking feeling that I'd backed the wrong industry horse. Fuck, even the commercials were better, and given Apple's marketing strength (really, always their best department), that's saying something:

Next: NOW I'll get to the Atari part.
Posted by Dave Kopperman at 12:07 AM