My Great Aunt Evelyn - always known to me as "Auntie Evvie," and to pretty much everyone else as "Gramma," - turns 94 this month. Today, the 16th, to be exact. And rather than trot out all the amazing and terrible things that have happened in the world since her birth, as a way at commenting on her startling longevity, I think I'll just take this moment to say: damn, that woman can cook. Or could cook, that is. I mean, I'm sure she still has the skills to do it - you don't bake an apple pie a week of 75 years straight and just forget how! It's just that, well, she's 94, and she's probably damn bored with all that baking.

And, oy. She's effectively ruined Thanksgiving for me for the rest of my life. No-one else can come close to that patented, cover of Yankee Magazine picture-perfect Traditional New England Thanksgiving Dinner that she trotted out, seemingly with as much effort as the rest of us would expend in making buttered toast. I mean, I feel badly for myself that she's passed on the workload to her children and I won't get to eat that primal meal anymore. But I feel much, much sorrier for the rest of you who will never know just how fucking great a Thanksgiving Dinner can be. Oh, you think you know, but you don't. Bear in mind that I was born on Thanksgiving, so I have a proprietary interest in the holiday, and I say: Evelyn. Tessier. Was. The. Best. Ever.

Yesenia and I had originally planned to attend the party at Wright's Farm in Rhode Island for Evelyn this past weekend, and then bum around the state for our anniversary, but stuff around the house left us feeling cranky and untravelworthy. But here's a photo (courtesy Judy Tessier), for that kind-of, sort-of, you-are-there vibe - the birthday girl, flanked by grandson Danny, grandson-in-law Rashid, and cake. 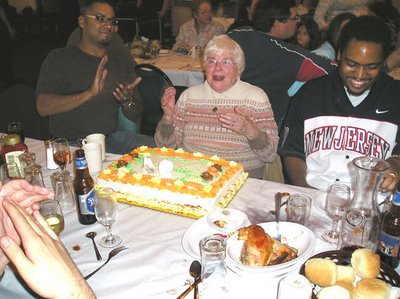 Note the little wine accident next to the cake. I'm guessing it was a rowdy old time at Wright's Farm. Sorry I missed it...

What is a grandon in law??...and how did Danny and Rashid happen??

You were missed! Cait is learning to bake applie pies...but she has a long, long way to go!

Your second cousin once removed in law, Judy

Yeah, we definitely wanted to attend. But the pictures were great, so thanks!