One more day until the next entry in the tale of my lost portfoilos. Today was a long day of actual work, which comprised of editing copy for the website of an investment firm - and since high finance writing and organization of information aren't exactly concepts that spring to mind when people hear my name, I'd like to say that it actually went surprisingly quickly. That it did is mostly because I printed it all out and then sat at the kitchen table and listened to vintage Yes, a live BBC album (is there anyone who doesn't have a BBC session disc in the can?) and got all China Marker on it.

The other part of the day was a morning meeting, and then getting together three samples for the second KPMG comic, since the next issue of the college recruitment magazine is on deck. This one is focusing on their foreign internships, so it was easy enough to spew out a few variations on the theme. Since one complaint about the last strip was that it was visually static - well, yes, but it was designed to be - I designed all these to have more visual possibilities in their final rendering.

You'll note that this time around, I didn't do as much detailed drawing for the first draft, since I find that I work better at getting the initial idea out if I don't slow myself down too much with all the titles on the book spines and the brickface and all that. The third strip (the 'translation" one) was mostly thrown together in Photoshop from sketches, as the computer lettering probably gives away. Anyway, the strips, with commentary: 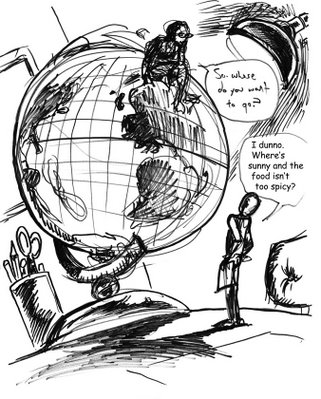 This image appeared in my head before I even left the meeting to discuss the upcoming issue, and it seemed that meant that it's either a strong idea or I'm too lazy to come up with another. SInce I was thinking along the lines of making it more visually interesting, I decided to push it further and make it a more fantastical visual and a splash page, for extra punch. Also, the Art Director wanted me to do the final in my heavy-ass Gerhard-meets-David-Macauley-in-Gustav-Doré's-Buttcrack over the top pen and ink style, so I wanted an image that I could render the shit out of. A lot of rendering in one big panel looks nice, visually, whereas a lot of rendering in a bunch of small panels is a guaranteed way to make a fucking unreadable train-wreck of a comic.

In case you can't tell, the dialogue was an afterthought. In fact, his first response was "Where's sunny and has a good exchange rate?", but that sparked a better verbal exchange on the subject that I spun out into it's own cartoon. I know the line about 'spicy food' is way too soft, but I doubt they'd run it if I had him wondering about the availability of cheap hookers, instead. 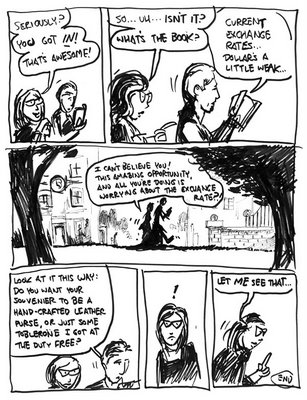 And there's the expanded version of the 'exchange rate' idea. Nothing much to add, except to say that to address the concerns about the lack of dynamism in the strip from the last issue, I decided to make this a 'walking and talking' page, with an old style college campus a the setting. If they choose this strip, I'll base the campus on Brown, which I can probably draw in my sleep.

The walking in front of buildings visual was adapted from the other visual idea I had at the meeting, some vague thing about having the two walking in front of a hyper-stylized city block that was going to have landmark buildings in the architectural styles of all the international cities in the internship program, but a) I couldn't think of any joke to go along with it aside from some half-assed Las Vegas line, and b) the final drawing would have been an awful lot of work, and I could see getting bogged down with it halfway through at three A.M. on the night before the deadline. 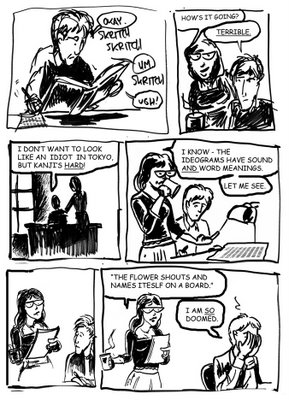 This is based on a true story from Karl and our mutual friend Christian. Christian has a Zen Yen, a thing for Eastern cultures, and he tried his hand at writing out some traditional haiku in Kanji, a Chinese-derived Japanese pictogram alphabet. Karl's friend Keiko vetted Christian's version, and the punchline of this comic is word-for-word what Christian apparently wrote.

As I was casting about for the third comic idea, Yesenia's new NYU online course to get her Spanish/English translator's certification came to mind. But Spanish seemed a little blah for the strip, but then I remembered this anecdote, and a beautiful synergy occurred to me: the Art Director is, in fact, native-born Japanese, and will, in fact, be vacationing at home in Tokyo next month, which he mentioned at the meeting in our discussion on deadlines.

It's so rare that the opportunity to steal someone else's funny anecdote and be a total kiss-ass at the same time occurs that it was too good to pass up. Although if Aki (the A.D.) does go for this one, I think I'm going to have to put in a panel at the beginning to make it clear that the character is trying to write Kanji, and she's translating what he wrote on the spot.

Of course, the female character is based on Yesenia, but she can be Japanese for one strop. Why not? It's the magic of lazy cartooning!