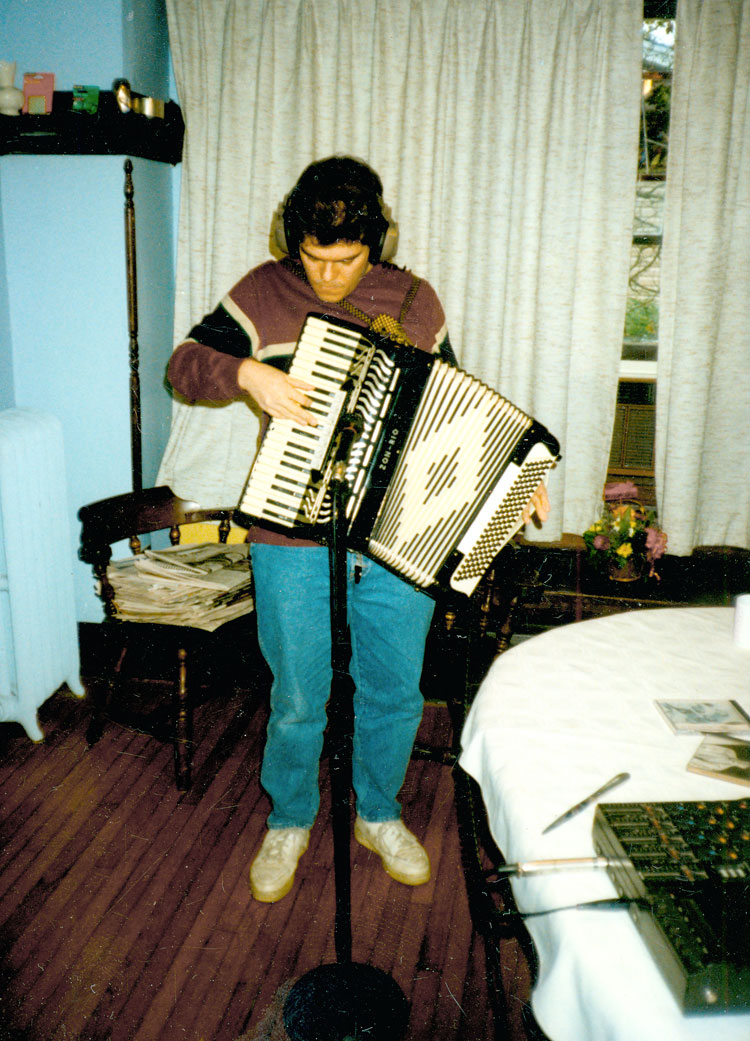 The demarkation line for what I consider the 'old' Dave music and the 'modern' Dave music is the year of 1996.* Two factors played a secondary role in this: 1) the 18 months or so that I played, recorded and toured with Lizard Music, and concurrently, 2) the few months I spent playing with Lost, Lonely and Vicious. I won't go too much into depth about either band today - those are both long, heavy essays that require a lot of set-up to make any sense (and I don't really have the mental energy to get into on a beautiful Memorial Day weekend) - and the only way they figure into today's essay is in their one shared feature - both were situations I stepped into after a major creative force had left the band, and both featured leaders who were now eager to explore having the full control of the band that their absent collaborators had previously prevented them from achieving.

Which means to say: in both bands, I was expected just to shut up and play. And much of the time, I was expected to shut and and play exactly what I was told to play (although in Lizard Music, I did have more input into my parts). Actually getting either band to play my material? That was out, and after finally coming to terms with the fact, I effectively stormed out of both bands in a huff. LIterally, in the case of Lost, Lonely and Vicious, after realizing I was getting the runaround, I shouted something to the effect of 'I never have any control!,' and drove off.

None of this, I should stress, was really the fault of either of the bandleaders in question, both of whom I had and have tremendous respect for. But I'd been an apprentice for too long and was, frankly, pretty fucking tired of it. There was also five years of RISD frustration thrown in for good measure - a whole lot of feeling that I had a lot of potential but had lost my way somehow, and had to fight to get it back.

The way in which these combined apprenticeships changed me creatively is, again, secondary. The primary factor for the change was the arrival of one Edward ("Edz") O'Leary. Or, really, the arrival of me into Edz's situation. Edz was, at the time, the drummer for Lost, Lonely and Vicious (LLV). He'd been recruited by the person I replaced, his high school friend (and guitar genius) Darryl. Edz and I got along pretty much right away - Edz was also chafing at the creative constraints placed on him, and I'd always admired his drumming (LLV had been a going concern since I was a teenager) and just enjoyed the act of playing with him, in the few places in the music of LLV where there was anything remotely like jamming.

Still, I doubt we would have done anything about just playing together - I'm terribly shy about finding musicians, and Edz isn't an instigator by nature. But it turns out that Daryll - having left LLV due to that old stand-by, 'creative differences' with his primary writing partner, really wanted to get another band going, and suggested to Edz that the three of us could give it a try. That lasted only a couple of weeks - Daryll worked out pretty quickly that I wasn't an effective foil for his music, and I realized that he had no real interest in the songs I was writing. So Daryll was off.

But Edz, curiously, stuck around.

And that begins the period of development in my music that still holds the most interest for me - because, I guess, it was no longer 'me.' It was 'we.' For a little under two years, Edz and I just tooled around in my basement dungeon as a duo, and I refined what my writing was going to be, mostly through finally discovering a working method that, to this day, keeps me feeling energized. What it boils down to is basically: generate a sketch of a song, usually pretty unfinished. Bring that to the members of whatever band it is that I'm currently a writing member of. Bounce ideas around. Fix things or discard outright and start from scratch. Repeat until a finished song emerges.

The most potent part of that is the ingredient that I left unmentioned: seek Edz's approval. Our working method over the years hasn't altered much, even with the addition of other players to the equation - I generally provide some basic song ideas and annoy him eternally with endless tweaks to his drum parts (generally trying to get him back to the first thing he played, which always seems perfect, but he often forgets) - but the one thing that has remained a constant is my need to have him like the material.

And even more importantly than my own fragile ego, Edz is singlehandedly responsible for making me a worthwhile bass player, still the instrument I feel most at home on. While I got lots of bass-learnin' from Bran Lancourt and Lizard Music bass wunderkind Chris Guice, real bass playing is something that only happens with a drummer. And, obviously, the better the drummer, the better the bassist you become. I think I'm a pretty rocking bass player - so what does that tell you about Edz? Still the best drummer I've ever played with. If there's a part he can't play right away, he gets furious with himself until he gets it right. Self-loathing is a tool for positive change, I say.

As a musician, the years I spent as half of the Analogue/Copper Man rhythm section with Edz were far and away the most rewarding in the area of pure playing. Never was there a moment that wasn't fun, and even now that I've moved back to keys, the occasional moments when I get to revisit the bass position with Edz are - and I'm sorry to resort to cliché, but it's a spot on image - exactly like getting back into a comfortable old suit and finding it fits perfectly. Because, with no exaggeration whatsoever, Edz taught me how to play bass.

Edz probably undervalues himself as a writer, and I've no doubt contributed to that somewhat over the years. Working with me in a creative situation can often confound people, I think. Chalk it up to my grating enthusiasm for my own ideas. Still, the very reason I trust Edz's judgement is that he's got a writer's ear, and a very good one at that, even if it's one he doesn't indulge frequently enough - although every single time Edz has deigned to cough up a musical idea for inclusion, it's always gone on to be one of our best songs. So go figure.

Really, I think it's that he has better taste in music than I do. That will always and forever be my true achilles heel as a musician and songwriter: lousy influences.

Anyhow, this Weekend Listening comes from very, very early in O'Leary years. It may not be the first thing we worked on together, but I'm sure it's one of the first. And you can see all of my frustration at my wasted potential coming out in this lyric:


As a child, they always felt I was born a special way.
They kept me informed of my progress on a daily basis.
A disciplined intelligence registered with several agencies -
But I can do without the constant referral on my listed allegiances.

We walked on by with no eye contact,
But someone said, "I recognized you from your picture, man!"
I said, "Yeah, we made no compromise... and look where it's gotten us."
He nodded once and backed away.
Disappeard into the crowd.
The ticker-tape fell,
And the music played a Sousa march at funereal pace.


Sure, the lyric is still too dense for the meter to comfortably accommodate - but there are some lines in there I really like. And, musically, I really like that bridge, which spooks me out listening to it, now. Certainly my own performance - particularly in regard to the vocals - isn't quite up to snuff. I do like Edz's vocal, though. Ryan Ball once said of Edz that 'he has the perfect band voice,' and listening to this, I know just what he means. The haunting, plaintive quality he brings to the bridge is something I couldn't muster if I were dependent on life support and all the circuit breakers in the hospital just blew.

Oh, and the name 'Edz?' Taken from an old Albert Brooks impression of Arnold Schwarzenegger. In case you were wondering.

*Yes, I wrote that with a straight face. It's my blog, dammit!
Posted by Dave Kopperman at 4:37 PM

Oh, okay. Well, I see where this is going.

Alright, I'll quit the band so you will be free to play bass with your drum playing boyfriend Edz.

You can still practice at my house. I'll serve snacks and just sit in the shadows, looking on with a plaintive stare.

WHy do I not remember that song? WHo played harmonica on it?... I have no memory of this...

I don't recall you liking much of the Dave product from this period, but it's not surprising that you wouldn't recall it - you might have heard it once, in passing, and you were really consumed with Johnny Bravo at the time.

What do you think of it now? I'm definitely looking forward to digging up all of the dark horse songs from this period - there's got to be at least an album's worth, if not more, and I recall them all being really ambitious, in writing and recording.

its interesting, I hear different things in it.. floyd, genesis.. and there;s a snatch of the melody from 'Yes it is' on the chorus... Definitely a dave b-side but all the odd instrumentation makes for a cool addition to the catalog

If you listen hard enough, there's Floyd and Genesis in every song I've ever written (more Genesis than Floyd, I think).

I'm not quite hearing the "Yes It Is" bit, but then I've never been that familiar with early Beatles.