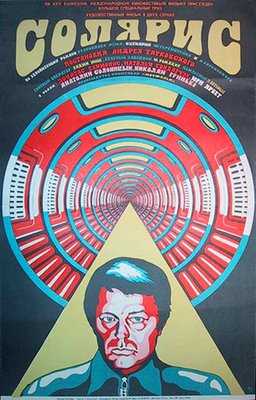 Finally, finally, finally saw the 1970's version of Solaris, the Soviet-era film adaptation of Stanislaw Lem's novel. The film is supposed to have out-Kubrick'd Kubrick, a film of such weight, depth, breadth and any other measure of size that it's supposed to be the thinking-man's be-all and end all of science-fiction cinema.

Annnnd... it was good. Quite good, depending on your patience for lengthy scenes about not much of anything, of which the majority are in the first half of the film, including a five minute wordless montage of a tertiary character and his son taking a speeding taxi through Tokyo. During the day. On a highway. Mostly through tunnels. Certianly, in these long, exhaustingly pointless takes, Solaris goes further than Kubrick ever dared in tedium.

But. It gets much, much better - or at least, more focused, since I confess to actually liking those early scenes of boredom. Boredom is an underrated quality in films, useful for creating a certain tension in the viewer.

I'd say that its reputation of world-beating greatness is founded on its relative obscurity, which is often the factor that makes people build things up to levels where the real thing can't hope to deliver.

The plot is much the same as the Soderbergh/Clooney remake from a few years back - which I have yet to see in its entirety. Both films, however, diverge from the novel, which made Lem cranky. Having read a few works by Lem (curiously, Solaris is not among them, though that will be remedied), I think it's safe to say that mostly everything made Lem cranky. Where Lem's novel focused on the ultimate impossibility of understanding the truly alien, director Andrei Tarkovsky instead focuses on the nature of memory and love.

Basic plot: alien ocean world consciousness Solaris messes with observing human scientists by plucking memories from their sleeping brains and creating versions of people from their past to haunt them. In the case of lead character Kris Kelvin (played by the most Russian-looking man I've ever seen... 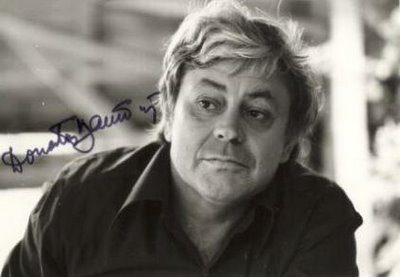 ...right?), he wakes after his first confusing night on the station to discover his long-deceased wife by his side. Alive, of course - although, back and still dead would be an interesting film of its own.

As with all great science-fiction, what Solaris does with its premise is take it seriously, and plays it out in ways that are genuinely, truly haunting. For starters, the 'guests' (as the memory-people are called) have free will and the capacity to learn and change. Kevlin's wife - and this bit is very important - had committed suicide after he'd left her following an argument. Kelvin can only guess at the reasons, and even though the version of his wife (Hari) that Solaris provides him with is only reflective of Kelvin's memories of her, this new Hari brings fresh insight to him as to those events.

"Space is a mirror," another character says in the film (or something similar), opining that man isn't capable of dealing with the unknown and can only really find aspects of himself. The memory-Hari, created as self-destructive as Kelvin recalls, finally sacrifices herself to free Kelvin and/or free herself from her terrible self-knowledge, but Kelvin instead strands himself on Solaris - which has been irradiated with his brain waves (don't ask) and has made Kelvin an island where he can live out his life in the past - curiously, with his father and mother (and dog) at their family estate.

A lot of what Tarkovsky has to say, he says with the form of the film itself. The film stock switches from color to black and white at seemingly random times - so random that I initially wondered whether these were merely symptoms of budgetary issues. But, no: since the film follows dream-logic (in a way so effective that would and no doubt has made David Lynch squeeze his dancing midget in a fit of jealousy), the alternating modes lend their own contemplative air to the proceedings. Think about this, or don't, Tarkovsky seems to say; it just is as it is and will not be affected by your opinion of it. The film manages to walk a surprising line between deeply-felt empathy for the characters - including the fractured Hari - and a clinically precise and detached observance of events. Perhaps a perfect tone for a film about scientists who have become tormented by ghosts from their pasts.

It's topped off by some elegant set design, cinematography and soundtrack. Even the special effects are effective - far from seamless, but moody and of a piece with the film. So let's call this a recommendation, although since no-one that I know who reads this blog shares my taste in films, Lord knows who this is a recommendation to.

One stray observation: apparently, the 1970's existed even in the USSR. Who knew? I wouldn't have been surprised if Kelvin took Hari to the disco, at one point - he was certainly dressed for it.

Note: There is a Criterion edition available with excellent picture & sound quality.
Posted by Dave Kopperman at 10:42 PM

yeah.. I once caught it on tv, and couldn't get past that exact scene you were talking about in the taxi... just interminable, but now that you say it gets better I'll check it out again...

You should check out "The Mirror."
By far my favorite Tarkovsky film. It is difficult in some scenes, but great in others.

B: I realized only after your comment that I should have put a 'spoiler' warning in. Sorry.

S: Yeah, I'll check out more of his work.

Totally agree about boredom and long stretches with nothing going on being important in a film.. seriously..

But there's got to be a director who knows how to use them - dynamics. Like, M. Night is the king of slow and boring but never knows how to pay it off.