Apparently, All Their Dime Dancing Was Through 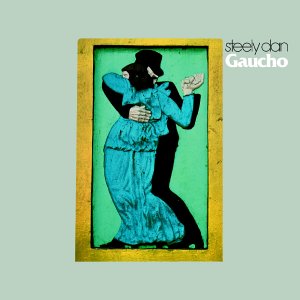 
It's been fifteen years since I sat down and listened to this album, and that's as close to a clean slate as any possible listening experience can be, under the circumstances. I put it on tonight as an accompaniment for homework, but since the homework consists mainly of math, I was able to free up the rest of my brain to listen and analyze. Curious that it's easier to do that while working on math than while writing - I wonder if that's a universal, or if that's just me. Take note, if you ever need to defeat me in some kind of cosmic 'Contest of Champions' and need to find a weakness, that the math part of my brain and the music part of my brain are not the same. At all.

At any rate, the quick review: this album sucks. Perhaps even more than I remembered it sucking, and I recall coming away from it with a pretty dim opinion way back when. If that seems a harsh review, read on for the caveats.

See, the problem for Gaucho is that it has the unenviable task of following up Aja, which, if not the actual peak of Fagen and Becker's work, at the very least represents the ultimate refinement of their creative method, writing style, etc. Everything they'd been striving at, brought perfectly into crystalline reality. There may be other albums from the band that people prefer, but I don't think anyone who's ever given Steely Dan a serious listen would argue that Aja isn't their masterpiece, a sophisticated groove at the edge of coked-out 70's apocalypse, with tasty bass and drums snaking in and out of seductive chords that hang on the point between bemusement and melancholy. And I can't personally think of an album where the lyrics and voice match the tone of the music so well. Seamless, which sounds like faint praise until you realize that seamlessness was what they were aiming for.

But what do you do when you've done what you set out to do? Few bands are able to find a second peak, and Steely Dan was not one of the lucky ones. I'd note that more than one band in that particular period at the tail end of the 70's found themselves in the same boat (The Eagles post Hotel California spring to mind), and I guess that the advent of punk and new wave (and disco!) and the self-reflection that seemed to hit all of the existing rock dinosaurs was a difficult thing to process. The question all of these bands must have asked themselves - either consciously or unconsciously - was, 'how can I prove I'm still relevant in the face of all of this?'

Which is a valid, but dangerous, question, for any artist on a roll.

It's one thing for a band that had run out of creative steam to examine the new thing and see what they can do with it - the post Peter Gabriel Genesis was in that boat, having clearly run out the thread of whatever it was that inspired their high-progressive period (Trick of the Tail being their last truly great prog record), but not quite able to shift gears until they found that they could take the elements of new wave (not punk, thank God for them) and apply them to their own writing formula. I still maintain that Abacab is one of the great artifacts of the new wave era, proof that a band can reinvent themselves and still be just as good.

For Steely Dan, neither punk (which was musically 180º opposed from their crafty arrangements and thematically the exact wrong kind of negativism) nor new wave (a much broader stylistic pool, but generally characterized by tight, pared-down rhythm work, more space in the harmonic structure and a propulsive contrapuntal tension between the band arrangements and the vocal melodies) could be an effective template for them to try to graft on to their existing approach. Particularly when their previous album had been such a successful statement of their working methods up until then. Again, it's always trickier following up success than it is reworking from failure.

So Gaucho ends up sounding for all the world like the sonic equivalent of a towel being thrown in. The recording approach had plateaued and calcified, lending the songs an air of paint-by-numbers arrangements. The session musicians - many of them holdovers from Aja - seem equally uninspired, collecting a paycheck by trudging through half-assed grooves that seem derivative of their own exciting work on the previous album.

It's especially annoying, because the album gets off the ground with two solid singles ('Babylon Sisters' and 'Hey Nineteen'), in a one/two punch that actually betters what Aja (not really a singles album, excluding 'Peg') was able to do in that regard. But there's an immediate crash and burn on the third track ('Glamour Profession'), with a malaise that doesn't creep in so much as slams down with the force and texture of the Boston Molasses Flood, a sudden oppressive wave of dense, uninteresting progressions and autopilot grooves. The image comes to mind of Fagen surfing lazily along the top, lying enervated on a shattered hunk of sticky oak barrel, casting out nonsense couplets that sound less like the seen-it-all, above-the-fray and too-smart-for-the-room barfly of previous albums and more like a crazy homeless man wandering down his beloved Hollywood Boulevard, his mind finally having sunk under the weight of all of that decadence. Perhaps he's even still aware enough to recognize his broken state (ala Syd Barrett's 'Vegetable Man'), as he hints in the line: 'Living hard will take its toll.'

Becker and Fagen, rather than using the mirror of the punk and new wave revolutions in a failed attempt to remake themselves, instead stuck to their guns, but seemingly not having the confidence to do anything other than go through the motions... almost as if they agreed with the punk argument that Steely Dan and their ilk were puffy and outdated, and were unable to mount an argument with which they could even convince themselves otherwise.

totally agree with your assessment.. That's why I've never been able to bring myself to buy Gaucho... As you say, Babylon Sisters and Hey 19 are great, but the rest is the definition of throw-away...

Could have been the beginning of the writers block that Fagen would suffer through for the rest of the 80s... Save 'The Nightfly' he couldn't wite anything for 10 years.. he was tortured so much by it that he attempted suicide a couple of times...

Nightfly was pretty awesome, though.