Spent a goodly part of the day at the recording studio, as Ryan called me last night and mentioned he'd booked some time. Frankly, I jumped at the chance to resume my role as producer/kibbitzer on his album - probably a sign of how badly I've been neglecting my creative self these last few months. I was fucking overjoyed to get in there and start working. It's not my money, true, but I definitely feel it's one of my missions to keep Ryan focused and thereby save him money.

Anyhow, it reminded me that's it's been quite a while since we've had a Weekend Listening 'round these here parts, and since class is winding up (all my lab reports are due this Tuesday, and my final exam is the 15th), that'd be a good feature to resurrect. Double-good, considering how content-starved the Rambler has been for the last few weeks.

On that note, I realized as well that I haven't yet put up the most recent KPMG College Recruitment Magazine comic. It was finished back in mid-November, but I was pretty hesitant to post it, since a) I didn't want to curse it while it was still in progress, and b) I didn't write the thing and don't really like the final product. But since the thing has been approved and invoiced, there's no longer any reason to fear reason #1 - and, reason number two... well, I've already told you I didn't write it, so I invite you just to look at the art. 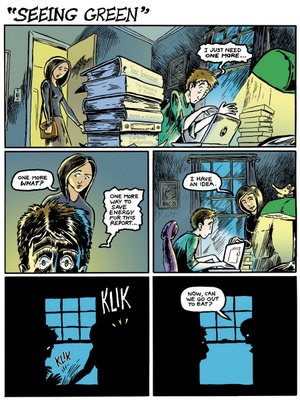 Karl actually felt that this was the strongest visually of all the comics I've done since my revival. It's true that I've finally been getting a handle on how to blend my detailed pen and ink work with color - the needs of which are almost mutually opposed - but it's also a sign of how far I've managed to overcome a lot of the negative feelings I had towards my own art over the last fifteen years. But that's also symptomatic of the split I've been noticing in people's reaction to my comics of late - there are those who prefer the detailed pen work, and those who appreciate the more spare brush line that I've been favoring. Since the Art Director at KPMG likes the pen and ink work, I've been delivering just that - but I do feel like all that crosshatching is kind of a crutch, and I should stick to my guns on my own (theoretical) personal work and refine my brush technique.

People who follow the KPMG strips on the Rambler might notice that the characters look a little different - indeed, a little more generic - this time around. That's because the original characters were - to me - Yesenia and me, and when they sent over the scripts, I just didn't have it in me to use those specific characters saying that dialogue. In fact, i initially didn't even sign the comic, but the Art Director flagged it and asked me to do so. I did, with the stipulation that the writer also be given credit. Again, two reasons; 1) it's incredibly unethical to take credit for another's work, and 2) I just didn't like the script and didn't want my name associated with it.*

But that did put Comic Dave and Yesenia out of work. I hadn't realized it, but it turns out that I do feel a proprietary affection for the original characters, which means I should probably take Ansley's advice and start doing some personal comics with them. It would be nice, really, to take them out of their shallow set-up and punchline existence and put them into a slightly longer narrative with the Jessica Abel-like rambling verité style that I think would suit them better.

We'll see; I don't want to promise anything I can't deliver, but in all of my anxiety about jobs and money and future and all that, maybe there's nothing to fear in putting together a decent few pages of serious comic attempts - it seems like not such a waste of my time and resources. All of my writer/artist friends out there can expect to be hit up for writing and drawing advice on this when I do get something started. You have been warned.

*There's also the other comp sketches and a much more in-depth version of the story, but I think I'll save that for a Walrus Comix feature at some point. I'll let you know when that's up - don't expect it soonest.
Posted by Dave Kopperman at 10:45 PM

All you need to do is illustrate any adventures of Dave and Yesenia you would have written for the Rambler. You already have instant stories.

I'm thinking of these stories as the adventures of me and Yesenia if we'd gone to college together, or something. Definitely want to keep the characters in their early 20's.

"Maybe there's nothing to fear in putting together a decent few pages of serious comic attempts - it seems like not such a waste of my time and resources."

Anything that makes you happy is never a waste. You also have fans, which means it creates more happiness than just your own.

I love Karl's idea! Like you did for that ill-fated visit to West Point. That was awesome. Though I love your idea too - and there's no timeline on these things, so you can do it all! Eventually. :)

I don't get it... what was so horrible about the writing on this one?

There are a lot of reasons, but I don't really want to get into it.