As part of some sort of community outreach, the Rockland Center for the Arts had art teachers from all the local schools come by today and participate in various seminars from the Center faculty. I was, I say with some pride, one that the teachers' group requested, so I gave a talk for about 90 minutes today to a roomful of adults about comics. And I only lost one out of the fifteen of them, which, statistically speaking, ain't so bad.

Anyway, I did my usual distilled schpiel about comics and how great they are as a tool for self-expression and communication, and added to it a litany of skills that kids can learn while producing their own comics, for the sake of the teachers. I do feel, genuinely, that including comics as part of any school arts program is a stellar idea, since comics (at the very least) forces kids to think about narrative order and effective communication. In my own case, producing comics starting at around 12 made me recognize the lousiness of my own handwriting - an interesting topic for a Rambler in its own right - and taking the effort to clean up my lettering for the comics I produced also made my handwriting across the board much, much clearer.

I'll probably continue these reflections tomorrow - for now, I'm a little busy with work, so I thought I'd just share the Vomit Comic that I produced at the top of the session. For those who missed these previously, a Vomit Comic is a full-page self-contained comic, drawn directly in ink (usually a Sharpie), started from scratch and brought to completion under a strict fifteen minute deadline. Today's entry is startlingly literal, but my motor was running a little slow and I'll confess to feeling stage jitters at having to lecture to a room of adults instead of kids. 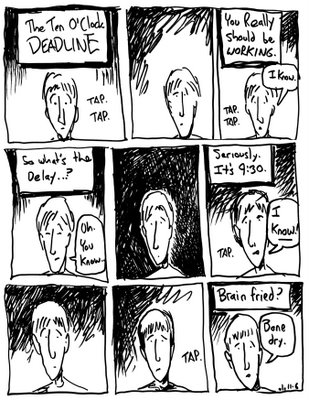