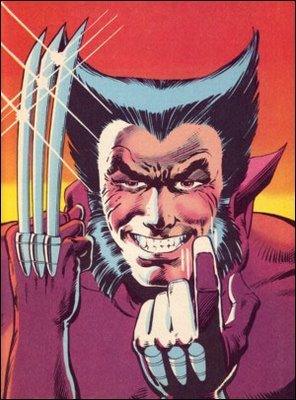 Things proceed slowly, as I feared they would; I'm incapable of unpacking these boxes without having an uncontrollable desire to read every single one of these things. It's like sorting 5000 physical manifestations of Proustian Rush, one 24-page, four-color spark at a time.

Thinking about the strategy: maybe bring a few high-ticket items with me, to see how they sell, and then a couple of long-boxes full of ¢50 wonders, so that the day wouldn't be a total loss.

Above is an example of one of said valuable items in my possesion (or, "The Kopperman Collection," as I've taken to calling it) - the first issue of a Wolverine limited series, drawn by Frank Miller - of later Sin City and 300 fame. Back from the early 80's, when things like Miller, Wolverine and even limited series were still a pretty new thing. A mint copy (the highest possible grade) supposedly is worth $100. Mine is actually in quite good condition, possibly 'fine,' thought doubtful 'very fine.' So I would hope that I could get $30 for it.

Really, I'd be lucky to get $30 for the entire four issue series. I don't know.

You know, for a guy that works in advertising, you'd think I'd have a feel for this whole selling thing...

why are you selling this stuff?

Well, that sounds like it should be a Rambler in and of itself...