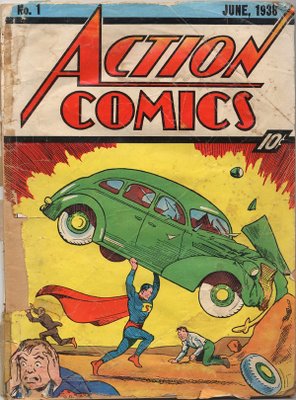 Next to no juice left on the laptop this evening, and I just can't be bothered to get out of bed and plug it in. So this Rambler faces a time limit. Perhaps more serious: it faces a brain limit, which can't be overcome by plugging me in.

This week, the big project begins: the unloading of the comic collection. It's something I've been meaning to do for years, but with something like 5000 comics in my collection, I haven't been exactly looking forward to the task. But it turns out that the local Church is hosting a comic convention (well, sports memorabilia, coins and comics), so Jim Doller and I got a table (for the bank-busting price of $25.00) to hawk our wares.

Of course, that means I have to now go through my largely unorganized collection and see just what those wares are, and then see how much they might be 'worth,' and then be realistic about it and see how much I can really get for them.

I'm sorely tempted to just sell the whole thing for ¢.50 a comic, which would be a pretty remarkable $2,500 haul, but I think even that is a highly unlikely outcome. Reasonably, I'd be better off bringing my more 'valuable' ones down to the show, see how I do with them, and then go back and start dealing with the rest in some other fashion.

You may be wondering why words like 'worth' and 'valuable' are shackled in the Quotes of Irony? Well, any idiot who thinks that comics are like Apple stock and will seemingly rise is value forever (except after a dreary Expo, of course) is sorely deluded. A comic, like all other things on Earth, is only worth what someone will pay for it, and no more. When print runs are low and demand is high, something can sell for, yes, hundreds of thousands of dollars to insane people. When print runs are high and demand is low, even insane people keep the wallet sealed.

So: Action Comics number one, which features the first appearance of Superman, and of which fewer than 100 copies are known to exist, has an outstanding offer of (no shit) one million dollars for a near mint copy from high-flyin' collector types. Whereas Action Comics number 860, which features the eleventy-thousandth comic appearance of Superman and which had a print run of 150,000, all of which are still in existance, is worth only slightly less than the paper it's printed on.