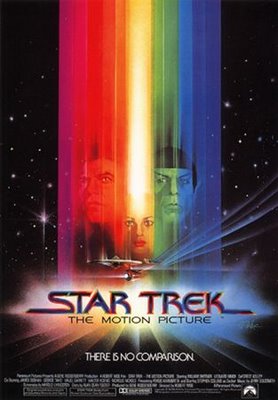 Tonight's title is stolen from the Mad Magazine parody of Star Trek: The Motion Picture. And, boy, how spot-on they were. Dick DeBartolo, I'm guessing - I think he wrote every movie parody Mad did from 1965 to 1982. Or something.

Anyway, Yesenia borrowed the DVD from a co-worker - really, he pressed it in to her hands and swore up and down that it was TOTALLY UH-MAY-ZING. She brought it home and I rolled my eyes so hard I almost passed out. I thought, prayed, hoped I might be able to spare her this curious misfire in the Trek canon - a gigantic sleep-inducing ICBM that I knew was only going to seem that much more lumbering and cumbersome ('lumbersome?") in comparison to the fourth season of Next Generation we'd just finished with the night before.

And I did warn her, of course: are you prepared (asked I) to watch a movie that purports to be the beloved Star Trek property brought back to life on the big screen, but in reality is a perverse art film, wherein the veterans of the 1960's TV show are filmed standing around and reacting to a Douglas Trumbull showreel?

Seriously, this is a sloooooooow movie. Even the poster seems to warn you. Take a close look at the Enterprise. Doesn't it look like it's flying backwards?

Lord only knows what Robert Wise (the director) was thinking. I mean, I can't really fault him for wanting to lavish all that screen time on the special effects - they're lovely. No-one had a way with verisimilitude like Trumbull (see also: 2001, CE3K & Blade Runner), but there are literal hours of the movie given over to Shatner & company standing around and looking at the viewscreen (oddly tiny in the redesign of the bridge, here, especially when you consider that this is such and effects-driven spectacle). Really, I wonder what the actors thought upon being given a script that could only have been about twenty pages long, with the cumulative dialogue amounting to no more than a few paragraphs on the bottom of page three:

Interior, Los Angeles, Day
We see WILLIAM SHATNER in his office, script on his lap. He has a look of confusion on his face, his shoulders slightly slumped and defeated. The telephone rings, and he startles. He picks it up. Hearing the voice on the other end, his expression changes into one of dread.

SHATNER: (Trying to sound cheerful) Gene! Yes, I did. Just now. It's... what can I say? (Pause, listening) Uh-huh, yes. And when will the full script be completed? (His expression changes back to shock, but he manages to keep his voice steady) So, this isn't the outline? The full script, you say.

Still talking, SHATNER leans over his desk and picks up a statement from the IRS. A close-up reveals that he owes the Federal Government several thousand dollars in back taxes.

What's especially odd is that even given the simplicity of the story, the mechanics of the plot are kind of difficult to follow - it's almost as if every other scene has been left out. Which they'd have to do, of course, otherwise the film would be four hours long.

Still, it was interesting enough to see this thirty years on, the weekend that the trailer for J.J. Abrams Trek reboot hit theaters. ST:TMP was a bad movie, almost comically slow and having one of the more predictable plots from the original series, sure. But it established an updated look and approach - and, especially, had some great music, with Jerry Goldsmith actually improving upon Alexander Courage, which is no mean feat. In fact, visually and musically, it's one of the real treats of 70's cinema.

But flash and pomp do not equal entertainment on their own, and the slowness of the film and completely bizarre structure totally sap the audience of any enjoyment. There's a really symbolic scene early in the seventh hour of the movie, where the Warp engines go kerflammitz, and the ship plunges - well, strolls; nothing in this movie does anything as swift and decisive as plunging - into a wormhole.

And then the world's slowest movie actually gets even slower.

That's right: the wormhole has slowed time for the crew, and the movie - which has already slowed to what could charitably be called a 'crawl' by this point - actually moves so slowly that it first draws to a complete stop, then starts to run backwards. Eventually, it runs all the way back before the opening credits and into the third season of the series, where we get to watch Kirk actually doing something, like hitting or fucking or emoting or doing any of those things that made the TV series so fun, but apparently was decided to be too challenging for the filmgoers of the 1970's.

Not, not really. But it's nice to dream, isn't it?

i was so disappointed with this movie when it first came out. But I didn't remember how truly awful it was until I revisited it about a year ago.

It is pure evil.

It needs to go far away, and never come back. Ever.

Oh, yeah. I totally forgot to mention that Yesenia didn't like it at all. About 20 minutes before the end, she turned to me and asked if it was going to end soon, or if we could turn it off.

The ironic thing is that the version we watched was the 'directors' cut,' which I'd heard was supposed to flow better. I can't even imagine how turgid it was before.

It turns out that the only sequence in the film that I really like - when Spock goes in to V'ger's imaging chamber - was actually directed by Douglas Trumbull, rather than Robert Wise. So Wise (who died recently, so I'll be kind) really was not the ideal choice to direct this movie.