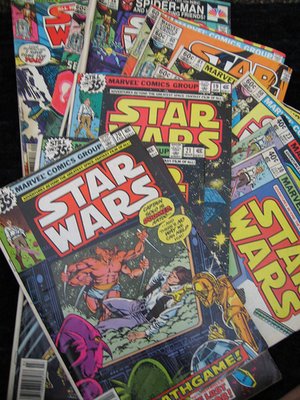 As the ramp up to Saturday's convention continues, and perhaps reading some ambivalence into my reporting on the progress, Anonymous wondered why I was getting rid of The Kopperman Collection in the first place. Too, Jim, who provided valuable sort and pile assistance today, pretty much voiced the same question, albeit in more specific terms - as in "why are you getting rid of this comic?" (No one comic in particular - he asked it quite a bit about any number of titles - although Marvel's Star Wars - which, as reported in this space before, is the cornerstone of my collection - was one that he asked it about, and one that admittedly gave me some pause.

For starters, as I think I mentioned the other day, it's not as though this were a sudden and impulsive decision. It's something that I've been thinking about in the back of my mind for the better part of the last ten years. Moreso since Yesenia and I moved into Beadboard Manor, which is where the bulk of The Kopperman Collection has been housed since its inception in 1980.

Really, what it boils down to is: I am not, by nature, a collector. I buy comics, and always have bought comics, for the simple - or highly, aesthetically complex - pleasures they bring me. I love the art form, in both high and low forms, and I understand the culture. But I just don't enjoy having all this stuff around. Boxes and boxes, gathering dust and taking up space. Admittedly, that's what the space is there for - after all, as George Carlin noted, your house is just a big box where you keep all of your stuff. But I generally regard ownership as more of a burden than a joy once the volume of stuff owned begins to get out of hand.

So, just trying to clear out space is one reason. Anything else? The fact is, I'm not, nor have I ever been, particularly attached to my collection, as most collectors would be. Which is a little odd, because a tour through these boxes is an archaeological dig through my own past, through the works that shaped my sense of fun and of art (and no doubt also showed me that fun and art are probably one and the same thing).

I also think that these things were made to be read, not hoarded, and I know that I've pretty well exhausted the reading potential of my backstocked collection. I used to dig out particular issues to read through - which is why the collection is in such a chaotic state - but I've tired of that. And it's one of those things that's been such a gradual exhaustion that I have a strong sense that it won't ever return with any kind of great force. Sure, I envision a pang or two once the Kopperman Collection has be broken up and sent to new homes. But I also suspect that I'll feel good knowing that people who want to read them will be reading them, which is more appreciation than they get from me.

There are many other variables at play, here: change in reading habits; shift from reader of comics as serial fiction to comics as personal statement; the availability of many of these comics in reprint form should I desire to read them again; the rise of other media (including the forum you're reading this on); etc. But what it really boils down to is not wanting to allow my love of comics to be confused with the owning of comic books, the desire to let others enjoy them, and maybe make a little money on the side. After all, it's not as though I'm going to stop buying comics to replace the ones I'm selling. Symbolically, when I paid a visit to the comic store today (every addict knows that Wednesday is new comics day) to buy some bags and backing boards for the high-ticket items, I also bought this month's issues of Fantastic Four, Futurama, and The Spirit.

So you'll excuse me as I close down for the night and settle into bed with some good comics. If you'd like, perhaps you can make an offer when I sell them at the local comicon in 2027.

1. Looking at those old star wars comics made me drool. I remember reading those when they came out. Going to M&M comics in Nyack, reading the Ronin in the corner, checking out the d&d modules on the shelf. I can understand not wanting to get rid of those things.

2. I can understand getting rid of those things. There is something to be said for a neat and tidy space. I think we share that in common. Not that my space is neat and tidy, but i desire it to be so. I don't have the need to horde and collect things. But I do hang on to some things for nostalgia. I would be perfectly happy to have everything in my life digitized. Movies, music, all form s of printed matter. Maybe a magazine sized viewing device that is able to call up anything I need.

I'm a little less thrilled at the digital revolution. I like my real media, but I'll admit that real media does require space. Both of our houses (yours and mine, that is) were built before the age of home entertainment libraries, so there's no space built in for anything, anywhere.

In fact, the only library in my house was built out of the original back porch, back in the '60s. I'm guessing that a lot of staring at woodwork was going on back in 1915, because that's all this house offered.

I wish I liked reading digital comics, but I don't. It's a hassle no matter what device I'm reading them on. I strongly doubt there'll be any technology that can replicate that feeling of holding a comic and turning the pages. Although that's being rendered an obsolete experience even before the digital age fully impacts the industry, since more publishers are heading into a trade paperback only model.

I think I'll finish this train of thought on tonight's Rambler... chugga, chugga.