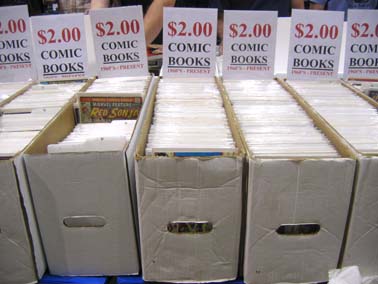 Sorry the no Rambler Friday or Saturday nights - the combination of the sheer effort involved of digging through decades of unsorted comics and the tension of Thursday's accident took a lot out of me. But, mercifully, after all that, I had a really good time doing the convention - it was relaxing to hang out after two solid days of crap.

My initial approach was to make four sections - a longbox of random comics for ¢.50 a copy, a longbox of $1.00 comics, which were sorted by title, and a longbox of $2.00 comics, also by title, with some of the slightly more desirable stock. Lastly, I compiled some of my 'big ticket items' into a single short box (holds about 150 comics), which prices I would decide on the spot, with a little research in advance to guide me.

Since I didn't have the time or inclination to decide the fate and price my entire collection, I picked three titles that had some sales potential and led with those. They turned out to be: Hellblazer 1-50 (which the film Constantine was based on) the Transformers comic from the mid-80's, and Amazing Spider-Man 230 to 320 or so, with issues 298 up featuring the art of Todd MacFarlaine (best known to those outside of the comic and toy world as the crazy guy who bought the balls from the Magwire/Sosa home run derby) and featuring the first appearance of "Venom," a character familiar enough to anyone who has seen the third movie.

I don't think it's a coincidence that the three most highly-valued comics are the ones that tie in to successful movies. The desirability of these things are driven more by things like that than by anything resembling artistic merit. In fact, I rather preferred the art of Ron Frenz, a skilled and dynamic draftsman, over that of MacFarlaine, who replaced him. I liked MacFarliane's exaggerated, thin-lined cartoon style for a little bit, but month after month of it turned out to be too much for me, and this dislike was the reason I stopped buying the book at the time. Which shows what I know.

I noticed after a little while that while my instincts were on for the ¢.50 box, and the $2.00 box showed some movement, no-one was particularly interested in anything the $1.00 box had, so I grabbed a few titles from it, and some of the extra boxes I brought to sort and made a ¢.75 box. That did the trick, and some of that started to move.

Altogether, I think I grossed around $50 - that's $20 for a copy of Amazing Spider-Man #300 and then mixed sales from an amiable goateed guy about my age (another dealer, in fact) who made two trips through the cheaper boxes, adding up to another $30. So, minus the $12 for the (shared) table, I pulled $38 - $7.60 an hour (I started at 10), or just a little over NY minimum wage. Not thrilling, but encouraging enough. Hey, it's five Subway lunch combos!

One sorry kid came back to the table about five times, pawing at the Transformers comics in a less-than-careful way, but his dad never even enquired about the price, and the kid just kept making comments like, 'whoa, this is cool' to no-one in particular.

Jim, who shared the table with me and bought himself another one to cover his mixed collection of sports, film and comic merchandise, fared far worse, only getting about $8.00, and having to pay for the other table by himself. Still, the event was successful enough for the Church that hosted it, bringing in about $1500, so they're going to run another in April. Hopefully, they'll advertise a little more heavily this time around. I'm definitely up for another one - the next time I'm going to make less room for the $1 & $2 boxes - maybe compile them in one box, and then really punch up the ¢.50 and ¢.75 boxes.

I may also mix up the big ticket items I brought, to see if my complete run of Sandman or some other things move better.

That make be the trick - rather than thinking that it's going to be some major profit-making venture, just minimize the expenses and bring stuff that you really want to unload, to the point that you're willing to undersell and not have an anxiety attack about it afterwards. It helps that my desire to just get rid of the crap outweighs my belief that I can make any real money off of it by a wide margin...

That's enough on the economic angle. Tune in tomorrow for my sociological observations.

Can't wait for the sociological observations!