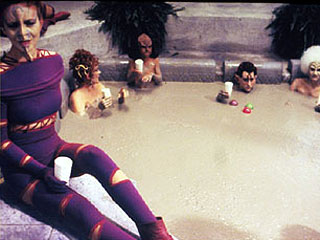 Yesenia & I are up to the end of season five of Star Trek: The Next Generation, and there are a few episodes I haven't seen - or, if I've seen them, they've totally slipped my mind. Most likely it's the former, because TNG is one of those things that wrote itself into my RNA. It's like muscle memory for me.

Anyway, last night had the oddest and creepiest episode I think I've ever seen of any Trek. Called "Cost of Living," I don't think I can really do it justice, but the gist of it is that hot-to-trot older woman Luaxana Troi comes on board to be married, and instead keeps taking Worf's five year old son to take naked mud baths. Really, as far as I can tell, that's both the plot and the theme: oversexed cougar obsesses about getting a young boy naked and sitting in a hot tub full of mud, along with some jugglers and acrobats. Really, it's creepy, and I have no idea what they were thinking.

There's some kind of vague b-plot about a life-form on board that's eating the ship, and I kept waiting for it to interact with the child abuse story, but nothing. It was such a strange episode. It's almost like I dreamed it. But no, there it is above: photographic evidence. 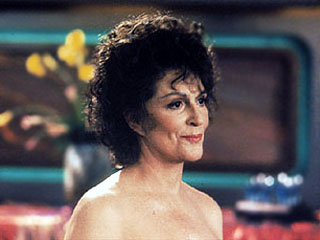 And the happy ending is that Luaxana decides that she's going to test her uptight fiancee, by showing to the ceremony starkers, which is the BetaZoid custom. But it's probably just because Alexander was there, and she wanted him to get one last look at her, just to really make sure that there's no hope of him growing up sexually well-adjusted.

And then the younger, hotter Troi (Luaxana's daughter Deanna) and Worf's disembodied head get into the mud with Alexander, Luaxana, the jugglers and the acrobats for the happy ending. Please don't ever let me watch that again. Maybe it's all the mud, but I feel really unclean, now.