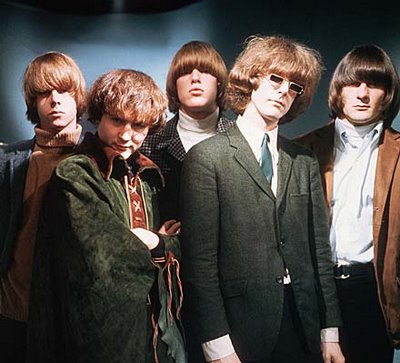 Since the first incarnation of the Rambler over at the old Copper Man band site, for years - literally - I'd been threatening to do a large, long post about the band I consider to be the best of all American rock acts, The Byrds. Somewhere in the back of my mind, I always thought I'd get to it, even recently toying with the idea of dissecting their catalog album by album, ala my (still incomplete, but it shall return) Pitchfork-inspired revisit to Pink Floyd.

But something always stopped me - and it's all right there in the first sentence of tonight's Rambler: "...the best of all American rock acts..." Well, that very simple statement right there requires a hell of a lot of parsing. For starters, the Byrds were rarely, if ever, an actual rock band. Sure, they have a couple of genuine straightforward rock songs in there, but for the most part the rock was just a coloring for their folk style, or psychedelic style, or country style, or whatever it was they were doing that week.

Sure, a lot of other bands from the 60's dabbled in all those genres - the Beatles leap foremost to mind - but even when the Beatles did something in as straight up a country style as they could muster (Ringo's take on Buck Owens' Act Naturally, for example), it was clearly a rock band playing at doing country. The Byrds probably found it harder to rock than anything else (not merely the fault of drummer Michael Clarke, who had never played a kit before joining the band), and given that most of the original members came out of folk and bluegrass, rock was not their native language and only something that was arrived at as a way to be a successful band.

The Byrds also become hard to define even as a band, with four of the original five members gone pretty much in the same number of albums. Anytime a strong songwriting voice came to the fore - chronologically Gene Clark with the first two albums, followed by David Crosby, and then Chris Hillman - they promptly left the band after only having just figured out what they wanted to say as writers.

The most well-known voice of the Byrds, Roger McGuinn, was always the least inspired of the writers, although he wrote well enough - but it didn't matter, because the Byrds of McGuinn were not a band of writers, but a band of interpreters. And every time a strong musician or writer left, a new voice came in to fill the gap, starting most noticeably with Gram Parsons...

...who himself left after only one album.

Anyway, I'm not here to praise or bury the Byrds, because I find that simply an impossible task. They were too good and too varied and too unique to perform any kind of compare and contrast with. The reason for this post tonight: I've been following Onion Music Critic Noel Murray's excellent Popless essays, wherein he's not listening to any new music for a year, and instead going through his entire record collection and seeing what he loves, what stays and what goes. I'll admit, I was waiting with baited breath for his Byrds evaluation, and was a little afraid that he'd skip them - but:

"...[The Byrds are on my] list of the greatest “American” bands of all time, with the parameters for inclusion being enduring influence and indigenous sounds ... In the world inside my head, no one argues about “The Beatles vs. The Rolling Stones” without throwing The Byrds into the mix as an upstart contender."

And that about says it all. He does say a little more, and I encourage you to read the entire post - and I encourage anyone, ever anywhere who loves music to make the effort to know this band. It will be an effort, at first - lousy mixes and strange overdubs dog their albums the way decay and ignition dog nitrate film stock. But it will be worth it. The Byrds are the voice of America to me, going back all the way to the Carter Family and Woody Guthrie and affecting critical favorites Wilco and REM even today. Sure, they're responsible for the Eagles, but we'll forgive them for that.