The Weirdest Thing Ever 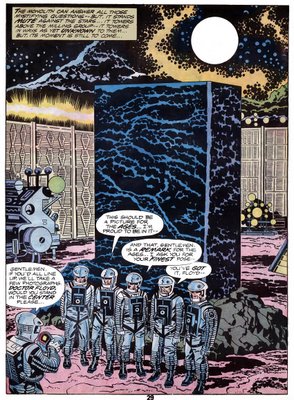 Those who are not versed in the history of American comic books might not appreciate how truly, truly bizarre the subject of tonight's Rambler is. To make an analogy: imagine if you were a fan of, say, David Lynch. And you're also a fan of, say, Stephen King. Two artists with very distinctive voices that deal in many of the same themes, but with a wholly opposed set of sensibilities. And then you find out that King's next novel is going to be an adaptation of Mulholland Drive.

Jack Kirby was, coincidentally, nicknamed "The King of Comics." Over the course of his sixty-year career, there isn;t a comics genre that he didn't work in - from romance, to war, to horror, etc. - but his real claim to fame is as the man who visually and to a large degree thematically defined Super Heroes. He created or co-created so many famous characters that a partial listing will have to do: The Fantastic Four. The Hulk. Captain America. The X-Men. The SIlver Surfer.

He brought an unmatched visual dynamism and stunning design flair to comics, but he was never satisfied being 'just an artist.' After a decade of tremendous success collaborating with Stan Lee at Marvel, Kirby (born Jacob Kurtzburg, as Lee was named Stanely Lieber) left Marvel for complete creative control over his work at Marvel's chief competitor, DC Comics. There he wrote, drew and edited a string of books, where the cosmic themes he'd been developing at Marvel really bore fruit, with a saga known collectively as 'The Fourth World Saga,' where immortal gods on twinned worlds waged endless battle over control of transcendental knowledge - known as 'The Source' - and the power to control all sentient beings in the universe - known as 'The Anti-Life Equation.' Characters named Orion, son of Darksied, and the Black Racer, and Kalibak, and Granny Goodness and Scott Free (who escaped life in the terrible orphanages on the planet Apokolips) and...

...well, you get the point. Big, crazy cosmic themes. Fuck - these comics weren't just cosmic. They were Kozmic.

Anyway, the Fourth World stalled, most likely because while Kirby was a seemingly endless font of mind-bending ideas, his scripting - the dialogue and captions in comics - was tough sledding for most readers. So Kirby went back to Marvel, with the same complete creative control that DC had offered.

And then the weird thing happened.

I honestly have no idea what to make of it. I feel the need to go out to a bar and get drunk and accost random strangers with questions and comments about it. I need to commiserate on this strange, dream-like object that I've finally held and read.

The main thing about it that comes to mind - apart from being the weirdest mix of elements I can think of - is the topic of adaptation from one media to another that most genre fans are constantly wrestling with.

It makes me wonder:

- at what point does a work pass its sell-by-date for adaptation? The film was first put into production in 1964 and released in 1968, but the comic came out in 1976.

- even those who don't like the film would have to acknowledge Kubrick as a singular cinematic artist. Kirby certainly holds the same title in comics. Can masters of two similar but fundamentally separate media have anything to say to each other in a situation like this?

- I'd have to imagine that Kirby was a fan of the film. But he definitely took liberties in his adaptation - some minor misinterpretations and changes in plot (which are understandable, given the film's impenetrability), and a wildly different tone overall. Where the film is famous for hours and hours of silence, KIrby's adaptation is captioned to death and full of invented conversations and hyperbolic dialogue. I'm not even sure how I feel about it. But it is an odd choice.

- When a work has the odd development history of something like 2001, is an adaptation into yet another media - even one that misses the spirit of the original work, like I feel Kirby did - really any kind of miscarriage? After all, the screenplay was a stitched together blend of a few Arthur C. Clarke stories, and developed those ideas further, and at the same time was being written as a novel by Clarke, which in turn has major differences from the film. It's kind of like Hitchhiker's Guide to the Galaxy - sure, the radio is the original, but more people are familiar with the books or the TV show that the idea of authorial voice and intent gets somewhat lost.

I know I'm rambling, and I apologize. It's just SUCH a strange comic. Beautifully drawn - and I mean BEAUTIFULLY drawn - and I'd even say that the scripting is surprisingly readable.