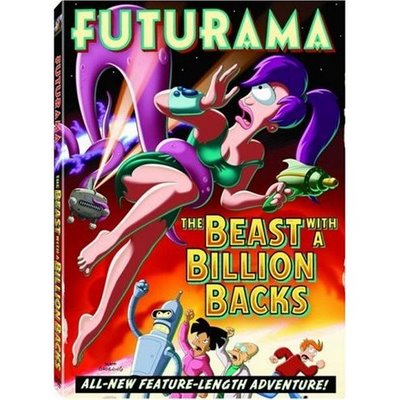 Well, we watched the second Futurama DVD movie last night, and it was (in my estimation) even better than the first. It's arguable that the plot hung together a little more loosely this time around, and for a while I was wondering if they were going to be able to tie the disparate threads - or tentacles, rather - together successfully. And, you know? They kind of, sort of, kind of did. Maybe not at the same level as the first, with the big Lucas space battle finale being won by Hermes' head, but it all stood up at the end.

But what made me like it better - possibly by a wide margin - was the sheer volume of classic jokes. The looseness helped in that regard, actually. Without having to hit a plot point every two minutes, the writers (or writer, since the sole script credit goes to Eric Kaplan) is able to leisurely set up some pretty genius bits, including a sci-fi classic that starts with a duel with planet-buster ray-guns and ends with a disembodied wart flitting to the ground.

Further, I liked the creepy tone the film had. The underlying theme is basically sad and disturbing, and there are scenes when you're not sure whether to laugh or get tense. As you can see from the package, the film takes as it's area of satire the 50's monster movie, but it goes in a completely different tangent. A good portion of the creepy vibe comes from the quasi-religious angle the story takes - this is a film in which the biblical rapture actually occurs, complete with golden escalators to heaven.

Lastly, I'm glad that Groening, Cohen and company didn't play any of the Fry/Leela relationship angle this time around. It weighed down Bender's Big Score by making Fry's decades-long, millennia-spanning lovesickness seem more like a sad obsession, and it flattened Leela out into a mere passive love-interest. Sure, Fry's lovesickness serves as an engine for the plot this time around, but the entire film is about loneliness and romantic loss, and it fits better here, if only because it's about a girl who (for once) isn't Leela.

Anyway, whatever kinks they needed to work out with the first film are gone here, and I'd put this one up against any of the best Futurama episodes.

As usual, your opinion and personal feelings are wrong.

While Bendar's Big Score was a cohesive and well written story, The Beast with a Billion Backs lacked it's focus. The jokes were good, but I found the pacing was a bit slower.

There were two things that got me about this movie. One, it wasn't just quasi religious, it addressed the whole afterlife aspect of a dominant world religion. (Not disrespectfully mind you, just not giving the same explanation as the religion.)

But the thing that really got me about it was the surreal story itself. In a world the writer's established, where anything is possible, this was pretty extreme. I'm can't say I didn't like it, but it was such an unusual story that I still haven't digested it enough to decide wether I liked it.

That being said, A bad episode of Futurama is still better then almost anything else. And I don't think this was a bad episode.

You may now return to your regular opinion.

Uh - did you even read my review? The whole point of it was that Beast was a lot sloppier than Bender.

As far as pacing - I think Beast moves really quickly. You didn't think that Bender got bogged down in the flashback/exposition sequence? Also, (and this may be just me) I thought the whole exile/retake Earth arc happened much too quickly.