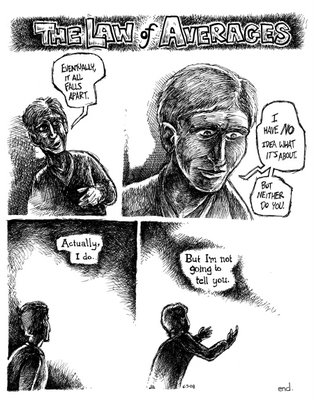 For this week's Vomit Comic, I decided to abandon the usual fifteen minute time-limit. Every other guideline remained the same: directly in pen, with no pencils; no prep sketches; no forethought or preparation; and as little self-editing as possible. Usually, the fifteen minute deadline makes all the other rules fall into place. But when you spend time on the rendering, it's surprisingly difficult to keep your brain disconnected.

Frankly, when I started this one, I had no idea that I was going to get all rendery on it. I just had that feeling that I needed to doodle and hatch, while slowly and evenly breathing through my mouth and rhythmically twitching my leg. When I go into my freestyle inking mode, that's probably Exhibit A in the proof that I have some kind of Asperger's.

Not to say I wasn't mentally all there for it - while drawing, I was conducting class. Although the woman who usually takes most of my attention wasn't there, and everyone else seemed intent on and content to work, so I didn't have to stand up and move around much. With the exception of one personal lesson on perspective, people walked over to me and I made comments on what they were doing and that was it. Leaving me free to keep drawing for most of the class.

Two streams fed into this strip. The first is a comic script that Kalliope has been working on - sort of a Shelley by way of the Matrix thing. When I'm really bereft of direction, I just pick dialogue out of the air. After having laid down the title and first panel, and drawn the second, I showed it to Kalliope and asked her what the character was saying in the second panel. She said she couldn't think of anything because she had no idea what it was about. I replied that I didn't, either.

Thus was a panel scripted.

The rest followed pretty easily. When in doubt, have the invisible voice of authority come in and make your protagonist feel lousy. The second stream is really responsible for that direction - mainly, I began to think about the sketchbook comics of Crumb, which I've always preferred to his 'real' work. A theme in many of Crumb's sketchbook comics have him petitioning the Lord and being either ignored or rejected. Or the other way around. At any rate, the overall look and tone of the strip seemed Crumbish to me - at least my version of Crumb - so I decided to finish it as an ode to him. Curiously, the end result does seem roughly halfway between his sketchbook comics and Kalliope's Victorian Matrix, so I guess I'll call it a success.

The bonus: now I've got something in my sketchbook that people who leaf through it (and don't understand that a sketchbook is for sketching) will finally see and think that maybe I can draw. All those other sketches and Vomit Comics with the Medium Point Sharpie work just fine for me, and allow me to get the idea and gesture out of my head as quickly as possible, but don't seem to have any visual appeal to the casual observer. And my ego is still a little too fragile to allow people to come away from my sketchbook thinking I suck.

Yeah seriously.. I dont know why youre being willfully obstructive about letting us run them for you at WC... I think they'd be great all in a row..

'Willfully obstructive?' What, are you Roger Waters, now?

Anyway, yeah, I was thinking more about it - email me.

Ha! That's an expression YOU always used to use..

Actually stolen from a Dave Gilmour interview question about Waters and their working relationship during "The Final Cut." GIlmour supposes that's what Waters thinks about him.