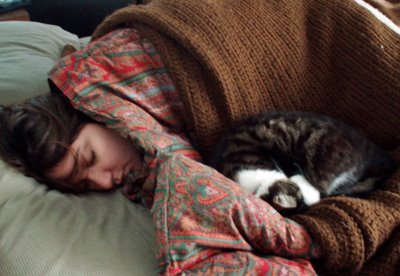 Tried the Wii Fit at Bubba & Fi's this evening, and I have to say that I'm completely sold. The Yoga program was particularly cool. I would buy one of those in a second - but it turns out that we need to set aside about $1500 to irradiate our cat.

Turns out the beloved Kiko suffers from Hyperthyroidism - hey, who doesn't? - and has lost two pounds in the last year. Not so bad if you're a human, but that represents about 20% of her total body weight. And of the three treatment options, I'm a little shocked to discover that injecting our cat with a radioactive isotope of Iodine and then keeping her at the clinic for five days is the most humane. The other options are daily pills for the rest of her life or surgery, and neither of those thrill me. And I'm sure they thrill Kiko even less - but maybe she should have thought of that before she gave us her Power of Attorney.

Oh, and why does she have to stay at the clinic - called RadioCat, no less - for a week? Not for her safety - it's for ours. Because, apparently, it's bad news to have a radioactive cat around your house. At first, I thought that was being a little silly, but then I realized that Kiko generally sleeps every night folded in my left arm just under my neck, and every morning by Yesenia, and, yeah, I guess I don't want to risk brain cancer from my cat's half-life.

Maybe we'd be lucky and get superpowers instead...