As noted earlier, over the weekend, I went up to Maine and accompanied my friend a Putnam Smith for a show of his as the North Star Café, in Portland. We were the middle act, so I decided to take the opportunity to sketch the opening and closing acts.

The opener was Brooke Brown-Saracino, a young singer-songwriter with a sweet voice and what she essentially described as a suicidal set of songs. She swapped back and forth between steel-string acoustic and an old ukulele, with the guitar being a little big for her and the uke (as is seemingly its job) being comically small.

Don't forget to click the pictures for big goodness!

I filled in the bulk of the curtains later on, just to give the drawing more heft. I'll probably send her a copy - before her set, I asked to buy a copy of her CD, and she said that she preferred to trade, so I took a copy of her CD with the promise that I would mail her Selling the Downtown Dream. I hope I made it clear to her that Copper Man - while plenty whiny and depressing - was not folk music, so the trade might be uneven from her POV. I'm glad I had her CD, though - it kept me company for the Maine and New Hampshire legs of my drive back on Sunday night. Good voice, nice tunes.

Above her, you can see a little bit of the Putnam sketch I started before deciding to more fully render the drawing of Brooke, as well as a little note to myself about the tuning for a folksy arrangement of Pink Floyd's Fearless that I was playing around with a few months back. I was trying to show it to Putnam, but it had been long enough that I'd forgotten the tuning and most of the picking style and had to relearn it. This time, at Putt's suggestion, I wrote the damn tuning down. I also made a quick GarageBand recording of it, with Putt playing some fiddle, which I'll give a listen to and see if it's worth posting at any point.

The closing act was a band led by and named for lead singer/guitarist/songwriter Christian Cuff, who had a line up consisting of himself on steel-string acoustic, a stand-up bass, a cellist, and - in case you can't tell from the drawing, a didgeridoo player. I realize the sketch is kind of... well, sketchy, but I challenge anyone to do a fully photo-realist oil painting of this band and make it clear that those two log-like things were didgeridoos. It's just not a concept that leaps easily to the Western eye. 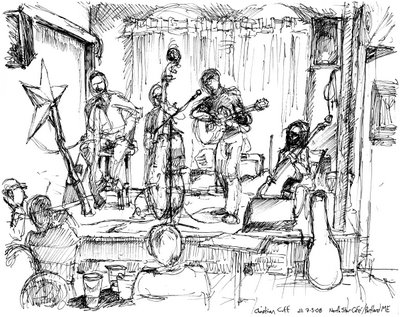 Obviously, no rendering on this one - the goal was to get all of the scene in. Apologies to the cellist. In reality, she's a pretty girl of Asian descent, and was not - contrary to the evidence presented in this drawing - wearing some kind of Martian Death Mask on stage. Still, the didgeridoo player liked it enough that he requested I email him a copy. Perhaps he was drunk?

Jesus.. DAVE.. those sketches are fucking GREAT.. looks like you found another gear...

Thanks. It's that large-format sketchbook. Provided you can get over the whole feeling like an idiot thing for carrying around a sketchbook the size of your torso, it really frees you up. Looser is always the way to go, as far as I'm concerned.

How big is your scanner?

Yeah I feel the looser vibe.. but also detailed and it has a mature quality... kid of Jules Feiffersy.. I like the line you've got going a lot..

A Mikrotek Scanmaster 9800XL, which was (I thought) the cheapest but most powerful Tabloid scanner I could find at the time. I love it! I still have to paste together the big sketchbook pages, but I can lay down a comic page to scan and not have to patch. Which is awesome, I can't tell you. It's also superfast and versatile.

I understand that Mustek makes a near-tabloid size for a fraction of what I paid for mine. I don't know anything about it, but I've seen people talk it up, whereas I'm the only person I know of who has my model.

What's with the big nose and lips eating the curtain on the first sketch?

I need me one of those..

I think I got it for around $970? It was under $1000. I went to PriceGrabber and found the seller that was the best of three requirements:

I also checked out seller feedback. It's probably the most responsible I've ever been as a consumer, because it was a big purchase and I'd feel badly about it for YEARS if I'd gotten burned in some way.

I'll see if I can remember who the seller was - some California company, who I also bought my monitor from, I believe.

The Mustek in question retails for around $170, and it's certainly the cheap way to go. If that were around when I'd bought mine, I certainly would have considered it pretty thoroughly - but the fact that it's only a USB connection (the Microtek is USB & Firewire and more) would have given me pause.

Do you know what the dimensions are for the Mustek A3 1200?

Will I be able to scan in a daily comics strip in one shot?

The only thing you might want to consider with the Mustek is setting up a spare computer to work as a scan station. It sounds silly, but if you're scanning a lot of high-res stuff at once (and you should be scanning your original line art at least at 600 dpi), that USB connection will become (in the words of Frank Nora) a real quality of life reducer.

On the other hand, if you're only scanning every now and then, it's not such an inconvenience.

Wow I cant believe its so cheap..