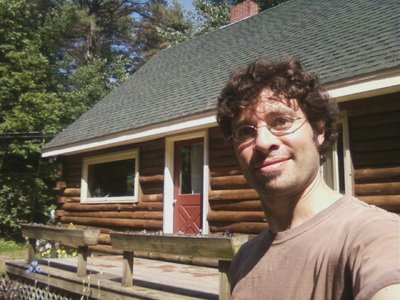 Sorry it's been a little spotty this week - as noted, I hotfooted Wednesday after P.C.M.A. for a trip to the Maine woods, to visit Putnam at his new log cabin. When he'd originally spoken of his dream of owning (building, in fact) his own cabin, he'd spoken with something like quiet hope about the fact that it was going to be completely off the grid. No plumbing, no electricty, phone, etc. So you can imagine the relief I felt to arrive Thursday afternoon to find a charming, comfortable, wired and plumbed log cabin.

Really a great place. Hot water showers and everything. Sure, he has some new homeowner's woes - the upstairs sink had been leaking on to the hot water heater and shorted it out, and the toilet ran, and the sump had failed and the house had been built in a drained swamp, so that was something more of a problem that it would have normally been, but by this morning, the toilet, hot water heater and bathroom sink had been repaired, and we also put up some shelves in the kitchen, so the whole place was becoming homier by the second, and Putnam put aside a lot of anxiety as it did.

Apart from being a desperately needed vacation, a primary reason I came up here was to accompany Putnam at a show of his at a nice club/café in Portland called The North Star Café, and I'm writing this as the night winds down post show, courtesy of the North Star's free WiFi. It ended up being something of a ramshackle set, since we didn't get quite as much practice in as I would have liked, but the crowd apparently really liked the set, and I'd have to admit that our voices blended pretty nicely on the songs that we'd especially focused on the vocal parts.

I also played a solo acoustic version of the P.C.M.A. song Neutrino (which normally features a Moog loop with the usual P.C.M.A. instrumentation of Rhodes, electric bass, brushed drums and electric guitar) with Putnam layering some nice Mandolin behind it. Frankly, it's a hard song to maintain my composure while singing, and I found my face twisting to force the emotion down. But the crowd - a pretty sizable one - was fucking stone silent for the performance, so I guess the sight of a man with a guitar trying not to cry is a watchable one. Afterwards, a man about my age came up and told me that he cried during it, so I guess I forced the emotion down so far that it accidentally leaked into someone else.

The rest of the set was Putnam and I leaping around instruments, with him variously playing nylon string guitar, the aforementioned mandolin, banjo and Rhodes (which I'd lumped up to Maine for the show), and myself playing my crap-ass Ovation steel string, electric bass and the Rhodes as well. The Rhodes threatened to throw a low G, which made for a few comical moments in the set, as when a Rhodes string (tines, they're called) is getting ready to break, it starts to make weird, wonky noises and vary widely in timbre and pitch. Since the tines are rated for about 4,000 hits, I told the audience that we were taking bets if the tine broke during the set, for a prize to be named later.

There was plenty of witty banter, especially milking the satirical gay panic vibe on his love songs that we harmonized on. All in all, a good show and a nice weekend, and I even got plenty of drawing done and made pancakes for Putnam, myself and some other houseguests.

Anyway, signing off from Portland, Maine. Hope your Fourth was as decent as mine has been.

Please do expound about the mysteriously italicized other houseguests.

Sorry - that came out more mysterious than I'd intended. Some friends of his came and stayed on Friday night, which certainly filled the three-room house to capacity.

What about this song reduces you to a blubbering face contortionist?

Since when have you been so emotional?

Oh, I've always been a soft touch - I recall crying during an episode of "Shirley" as a kid, when her car went off the road in a snowstorm and no-one could find her.

I'll send you a demo of the song at some point. Suffice it to say that it's an ode to my chromosomes.

It does start to add up to an interesting picture, doesn't it?