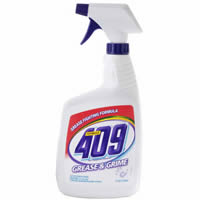 Last night's Rambler was the 409th, which, lamely, was something of a milestone I'd wanted to celebrate. Especially when you consider that this week was cleaning week at #49 (my street address), so the numerological possibilities were seemingly endless.

Well, no. I guess 'two' isn't exactly endless. Unless you're a decimal place, in which case, more power to you.

The big storm of the day just came and went for something like the fifth time. I'm enjoying the rain, but I'm a little put out that we don't seem to be getting just a nice, steady, rain for a few hours. It's just gray, heavy and muggy, and then all hell breaks loose for about ten minutes, and then it's back to the threatening behavior. You know what might take care of that? Some fucking Formula 409©!

How do I get my hands on some of that Dow-Corning money? I'd hate to resort to blackmail. Not because I'm morally opposed to it, but because I'm too lazy to go and dig up some actual CEO dirt. (409!!)