The Cat Ate My Rambler 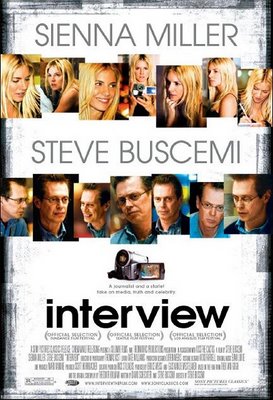 Sorry I missed last night - been working straight since Saturday, then sat in traffic for an hour last night on the way to PCMA. I probably could have blogged easily, but the Thing (the nickname for the laptop - keep up, people!) was in Yesenia's office and I couldn't be bothered to get out of bed and go down the hall to retrieve it.

Anyway, the power went out yesterday morning for a few hours, so I viewed one of our Blockbuster mailers that Yesenia didn't feel like seeing: the remake of Theo Van Gogh's Interview, directed by and starring (the quasi-eponymous) Steve Buscemi, with Sienna Miller as the interviewee.

And I have to say, Yesenia was right. There was not a single believable moment in this film. Which, considering it's a character piece entirely set within the confines of a single apartment, is bad news. And for the record, there are levels of disbelief that I should define:

Acceptable: in a film where a bunch of Hobbits and Dwarves set out to drop a magic ring into a fucking volcano, I can accept that a dude can mount a galloping horse by leaping backwards onto it. 'Cause, see, he's not a dude. He's an elf.

Unacceptable: in the course of a 90-minute interview, two complete strangers will completely divulge every single secret in their lives, right on the exact dramatic beats that the script requires in order to fit into something like a three-act structure. The film also loses reality points by proposing that Sienna Miller could ever be the target of seemingly universal slavish fandom.

Anyway, both actors do alright - she does a halfway decent generalized American accent, for a Brit ex-model - but the script is bad news. I'd be almost interested to see the original Dutch version to see if it was any better, but it would have to be a lot better, and, frankly, I doubt it. I think the stink of annoyance that rose off Buscemi's version had the familiar odor of way-too-cutesy-in-faux-cynicism that seems to lurk inside most European indie auteur films, and I'm guessing was a holdover from Van Gogh's original.

More interesting than the film was the central mystery that I posed above, that you read and didn't even think twice about: how did I watch the DVD if the power was out? Fuckin' battery-powered laptop, baby!

I agree that fil kinda sucked. Too bad, since I think Buscemi is an excellent director, and I love all his other directorial efforts (Lonesome Jim is awesome), and all his Soprano episodes...

I finally watched "The 25th Hour," the Ed Norton/Spike Lee thing. I always wanted to see it, only because the book it's based on was the first book that ever passed over my desk as a production person,lo those many years ago... wow, was it horrible... badly ripping off Scorcese and the ending was a total rip-off of Raising Arizona... man can Spike Lee be just egregiously BAD.

I've really wanted to see "25th Hour" as well, but it had Ed Norton, who (up until "The Painted Veil") really rubbed me the wrong way.

And I can see Spike Lee letting his own cinematic flourishes completely hijack the film. It's always a crapshoot that sometimes works (at the end of Malcolm X, Denzel floating down the sidewalk) and sometimes totally misfires (the "I Am Malcolm X" montage at the very end, for the people that apparently didn't watch the film that preceded it and needed all the themes summed up for them).