For those who don't recall, KPMG GO! is a recruitment magazine that megalithic multinational accountancy firm KPMG drops on college campuses. The previous two issues won some sort of award. I'm sure that had nothing to do with the presence of a strip from me in each. *cough, cough*

Anyway, here are the two sketched comics I worked up on Monday, for the next KPMG issue. Neither of these are world-beaters, and have been world-beaten themselves, neither meeting approval from the creative director (although he liked the "Pundit" one), so I put them here. Hey! Exclusive content!

This does illustrate some of the perils of doing creative work for a company of this sort. Obviously, the company has to maintain a corporate voice - but the theme for the issue is the upcoming election, and how the hell do you do a comic about politics under any kind of editorial constraint and still be funny enough for a college audience?

Clearly, you don't... as this first, completely soft strip shows: 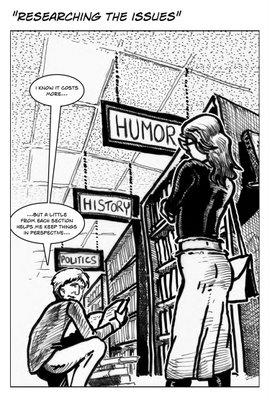 No real joke to speak of and even the play on historical perspective/visual perspective that was the germ of the strip is pretty much lost. But I like the girl's pose.

For the second strip, I thought I'd see if I could get a little more topical - but, still, not really talking about politics directly. Because I can't, see?

Pundits! Nobody lies a pundit, right? 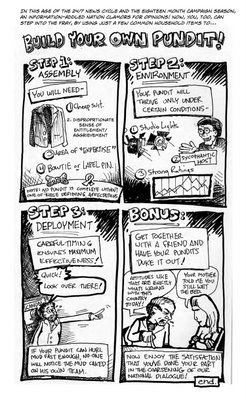 Still, too strong for the magazine, as I was afraid it would be. The original idea was a little different - Trying to confront the fact that I couldn't actually discuss politics but had to do a comic about them, I wanted to do something called Generic Political Cartoon Theater, which consisted of two people engaged in a heated political argument, only the topics and politicians were left out, so that an exchange would read, literally, "Senator A is trying to hide scandal B by using C!" But it didn't seem strong enough to support a full strip, and when I tried to draw it, the pundit thing came out instead.

Maybe I'll polish the writing on the pundit strip - it still doesn't have the rhythm I want - and see if I can make it work for me. I at least like the offhanded Ann Coulter caricature, if only for her bon mot. I did seriously consider having her call her opponent a 'faggot,' but a) I knew there's no way that was going to be in the magazine, and b) I doubt most people remember her referring to John Edwards in that fashion, and would think it was something I was saying, rather than my lame Coulter caricature.

There's a thin line between parody and hate-speech, and a corporate-owned college recruitment magazine is not the place to find out which side of it you're on.

Anyway, back to the drawing board- to see if I can be funny without being specific, which is a little like trying to steer a car from under the dash.