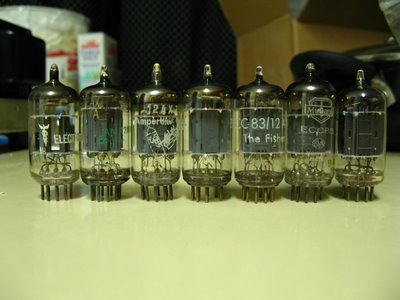 Breaking the 'don't fuckin' blog about PCMA' rule I usually maintain on the Rambler, tonight. Mostly because tonight's PCMA session is done, so I can't jinx the one that's past - although I suppose that I could be setting loose the bad-luck black dog with the evil eye on the next PCMA practice/recording session.

Scenario: A couple of the songs on the album have been left as instrumentals. I say 'left as,' because about 90% started life as instrumentals and stayed instrumentals for however long it took for someone to generate lyrics or melody for them - in some cases, were talking years. In fact, there's only one song on the album that was actively written as a song, with lyrics and melody developed roughly in tandem with the chord structure and arrangement. Everything else was just a glorified jam until we worked out how to give it form.

Still, given how much we all prize instrumental music, and having a strong desire to keep the flow of the album a little more interesting (to us, at least), we aimed to get at least a couple of pure instrumentals on there. One is essentially a texture piece, based around a Shaun chord change and filled out with some pointless (and rare) guitar noodling from me and rolling drums and bass from Edz and Karl. The other is much more tightly arranged, and about the only through-composed thing we've attempted. It's also paired in a suite with another song, and will eventually be given the string-quartet treatment by wünderkind Christian.

Meaning that the whole thing has an air of satire about it - it's essentially a full-fledged stately-ass waltz by a group of musicians that don't really have any business playing such music, which, of course, is the reason it has genuine value. When a band plays the kind of music you'd least expect them to play, it's almost invariably welcome. At least when it's done with genuine purpose. I can only vouch for that.

My part of the arrangement is some light Rhodes setting up the theme at the top, reinforced by some organ that's as close to church-sounding as I can coax out of my Roland and Fender Amp set-up. You know, the Fender amp that gives off a sympathetic, high-pitched ring on some notes.

Of course, the ring really cut through when we tried to get the big organ sound we were looking for. Thankfully, Karl had worked out that it might be one of the pre-amp tubes (for some reason, I'd always assumed it was the power amp tubes), and we tested it by turning the amp all the way up and tapping the tubes (12AX7's, for those who care). Rang like a champagne glass at an Italian Wedding, it did.

But when I took a closer look, I realized that it wasn't the tube itself, but the socket. I mean, yes, the tube was the thing that was ringing. But the amp has three pre-amp sockets, and two of them have plastic rings - whereas the pinging tube socket didn't. And to prove my theory that the plastic rings actually serve a function, and that function would be making sure that the tubes don't make that noise, the replacement tube rang just as much. And it always has, no matter how many times I've replaced the tubes - sometimes more, sometimes less, but it's always been there.

And here's the curse I'm undoubtedly calling down on myself by writing about this in advance of acting: some online sources suggest just popping a couple of silicone o-rings on the offending tube, and that will take care of it. And I like the sound of that - it's cheap and straightforward, and much easier than tracking down the right socket ring or replacing the socket outright. So let's hope that cheap and easy wins the race, this time. I dislike the alternative of pricey and hard.