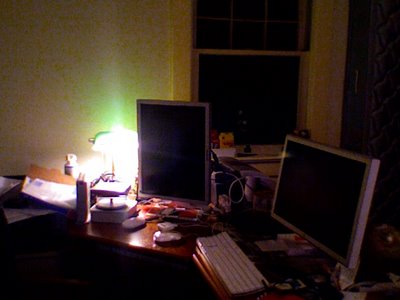 Yeah, another night's Rambler missed. What the hell, man?!

Would it be unchivalrous to blame it on my wife (hint to all of those single men out there: yes, it would be). Still, circumstances this week have rendered my Rambling a low priority, and primary among those circumstances is Yesenia's schedule this week. Her employer (Olympus Industrial America) is deploying a new database this week, and she's had to be at work at 6:30 every day this week.

Of course, this has totally exacerbated the respiratory infection that she's had for the last month or so, so that the new iteration was pink eye. Generally, she sleeps better when I'm there - or, at least, when I don't get into bed too long after her and wake her up. And whereas I usually would blog in bed (prefer, in fact, to do so), I'm trying to do everything I can to make sure she gets a good night's sleep.

Tonight's a little different, because I didn't get in until around midnight anyhow, and since she was already asleep, it seemed like I might as well write. To that end, I grabbed The Thing (the laptop, that is) and am writing this from the office. Lord knows why I didn't just write it on my work computer (the G5) or the Femputer (the MacMini) - or, hell, even Pazuzu (the crappy old Dell laptop), all three of which are already here in the office (see pic, above, minus Pazuzu).

I don't know. I'm punchy tired. What do you want from me? It's not like I charge for these things, anyhow. You know had it is... you get a set method of doing things, and you hesitate to deviate. I'm more of a creature of habit than most. It's not like I have a lucky shirt or anything (seriously), but my life is made up of a surprisingly small list of elements that are configured in various ways to create the illusion of complexity. I was discussing my feel for music earlier, and I described music I like as having a similar construction - simple parts that create complexity through combination. At least that means that I live like I play.

I suspect that will make my epitaph: a simple man who only seemed complex because he owned several matching combinations of shoes and belts.

My, this is more Rambling than usual. Truth in advertising, you know.

Are you trying to conceal something or just confuse people by flipping the image of your office horizontally?

Aha! I didn't even notice that.

I took it with the MacBook camera in Photo Booth, and I guess one of the two of those automatically flips the image for whatever malign purpose Steve Jobs has in mind.