Fifteen Minutes and it Shows

When I started teaching the Mechanics of Comics class last September, I wanted to get a feel for where everyone was in terms of development. The best was I could think to do that was to start the first class with an exercise where everyone had to do a complete page, cold. The drawing didn't have to be perfect - in fact, since I decided to set a time limit of 15 minutes, the chances were good that the drawing wouldn't be much of anything at all. Fast and loose, whatever your brain can come up with, but you have to finish.

And just to show that a) I was willing to put myself at risk by showing the new class that I could suck hard, so sucking is not such a bad thing, and b) just to loosen my stiff drawing muscles a little bit before getting into class, I sat down and did the exercise with them.

The first round of classes, we only did this once, and it did get the job done, in that I was able to quickly gauge everyone's level and try to pitch the class accordingly. Since the class was my friend Jim (age 36) and two 13 year olds, you can imagine that trying to find the right middle-ground was challenging, to say the very least.

It was only the second time the class was offered did it occur to me that starting every class with a 15-minute blank-page-to-finished-comic exercise would be good for loosening-up, and hopefully getting everyone out of their day and into class. And you know? It worked for me, but the second round of classes ended up with one very young crazy prodigy and three teenagers who didn't draw a thing for twelve straight weeks. Still, I continued with the exercise for the first few classes - which focus more on plot, character and layout than any actual drawing - and then dropped it for the latter half of the sessions, when we did get into drawing nuts and bolts.

About halfway through the second round of classes, I started calling the exercise Vomit Comics, because when you're under such a tight deadline, you have no choice but to make them stream-of-consciousness. Whatever is on your mind - even if you don't know what might be on your mind - ends up puked out onto the page. The time-limit is definitely a nod to Scott McCloud's 24 Hour Comics - in which an artist has to create a complete 24 page comic in 24 hours. Of course, by shortening the time limit to a page in fifteen minutes, that basically means that you'd do a freaking 96 Page Graphic Novel in 24 hours. There's a challenge, and one I'm sure I won't take up in my lifetime...

Anyhow, I guess I'll show you a few of these things. They're incredibly crude, and mind-numbingly stupid, but have to admit that I'm entertained by them. First, a note on the method and materials: I prefer to do these directly in Sharpie - which really means that the line you put down stays down - so no pencilling or pre-planning. I maintained that aesthetic here, so nothing has been retouched. Other than the first one, which was done with both a fine and very fine point, all were done with the one size. Lettering and legibility suffer as a result. Apologies. Also, the first one was done at letter size, where there others were done pretty big in my oversized sketchbook, 14" x 17". I like working that size - drawing becomes much more of a physical activity, and looping the lines around on the page is pretty therapeutic.

All right: the first half of the not-much-ballyhooed Vomit Comics, in the order in which they were created. Individual notes follow.

Remember to click images for larger versions. At your own risk. 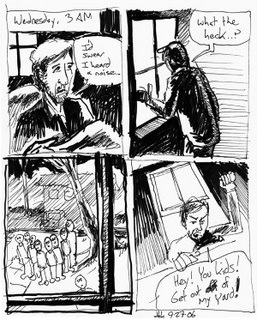 Punchline? What's a punchline? It's pretty clear that my anxiety about teaching for the very first time in my life had some effect on this comic. I think that third panel - the group of kids staring up at the window in the very, very late moonlight - is pretty creepy. I hadn't intended it to be, but the necessary quick drawing to get an entire crowd of kids in just a couple of minutes made sure that they ended up empty-eyed ghostly presences. Once I saw that's how they were coming out, I decided I liked it and just wnet with it, which os why they get increasingly creepy as they move out from the central figure - the first one I drew.

This is probably the lamest one, if only because it's so literal. Done not in a class, but sort of a 'come take my class!' session I did to drum up attendance. A mother and daughter - about eight years old, I'm guessing - were the only attendees, and neither took the class.

I guess I sort of like the big pose in the third panel, but really: meh. 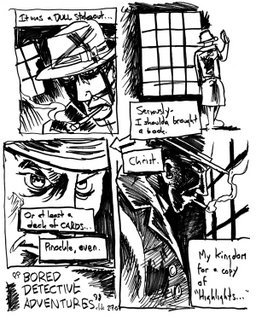 Really, what cartoonist hasn't done some lame detective noir comic pastiche at some point? I actually have a history of it, having tortured people with my own Hammond Cheese, Private Eye from 1987 to 1989. Of course, since I have zero interest in detective fiction or film-noir, Hammond Cheese ended up being more of an Indiana Jones rip-off. Which is also a little odd, because I don't really like the Indiana Jones movies, either...

This detective has nothing to do with Hammond Cheese, but no doubt that was at the back of my mind, somewhere, while drawing.

I've also played a half-assed detective/film-noir character on film, which means that I'm spreading my ignorance of the genre out over several media. Maybe I'll write the Detective Symphonies, next. 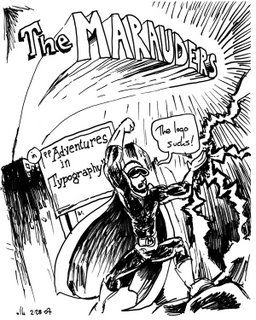 When in doubt, hit that metafiticonal/fourth-wall/self-referential button! Always guaranteed to never get laughs!

All right. Tomorrow, some more of these gems.