In Which a Thorough Soaking is Deservedly Had

So I got out and drove back to my campsite. Racing the rain, again, which at this point, was a 100% chance of happening. Got in, opened the gate to the camp, drove through, and closed it up again. Then finished the drive with my lights off. The camp had 'quite time' from 9:30 on, and I didn't want to cause problems driving it at 10:15.

No problem seeing, though - there were two tall sodium lights, including one about 30 feet directly above my tent. Of course, I hadn't even noticed this before, since it was still daylight when I left. Now, changing clothes in my tent, I noted that it was still like daylight, only amber and sleep-depriving.

Anyway, the rain started just as I zipped into my sleeping bag. But I was set. Water? Check. Apple Juice? Check. "Compact Camping Pillow" that I'd picked up in Brattleboro? Check. Itty Bitty Booklight? Check. Reading material? A copy of "The Comics Journal." So I settled down for my nightly reading myself into oblivion, enjoying the sound of the rain thapping against the outside of the tent.

After a few minutes reading about Roger Langridge's influences, I felt a little drip on my head. I aimed the booklight up, thinking that I hadn't secured the rain-flap properly. No, that was perfectly dry.

The tent walls themselves, though...

...the water was coming through the fabric. Straight through. Not as rain, but whatever moisture accumulated outside was - either by osmosis or condensation - swelling in individual drops on the wall, then flowing down to the floor when it had grown heavy enough. Shit: the tent wasn't waterproof. Not in the slightest. And the rain wasn't even particularly heavy - just constant. This was an all night affair.

I looked in the corners. Already, after only about half an hour, there were substantial puddles in each one. I reached down to my canvas clothing bag. The bottom was well-soaked. I moved it towards the center of the tent, and pulled myself away from the walls and corners as best I could. At this point, the tent was it, so I laughed at my idiocy and rolled over and did my best to sleep in the far-too-bight amber haze of the tent. Also made note to self: next time, bring mattress pad. The ground is hard and lumpy and a tarp, tent and sleeping bag do little to soften it.

A few minutes later, I added 'making sure I brought a real pillow along' to the list, having realized that the "Compact Camping Pillow" was from hunger. Refluffing and meditating on this, I drifted off.

A couple of hours later, I awoke convinced that the sleeping bag had been breached as well, but the dampness on my pajamas and skin just turned out to be sweat. I opened the bag, refluffed and recursed the "Compact Camping Pillow," and fell back asleep. 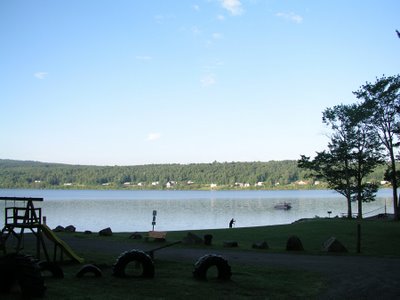 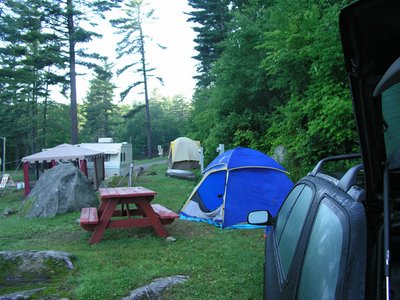 I awoke to real daylight. The rain had stopped perhaps a couple of hours before, and the camp owner was down by the small beach, clearing it for the day's use. I exited the tent - a pretty damp place at this point - and found my cell phone in the car. Time? A little after six.

Huh. Well-rested enough, and with a seven hour drive ahead of me to Bangor, I decided to break camp quickly and hit the road. I did my best to lay the sleeping bag out on a rock to dry out, but every other surface - car, picnic table, etc. - was far too wet to try to dry out the tent, so I rolled it up and put away wet. The tarp, also folded and thrown in the trunk still wet. I plugged my phone in to one of the outlets in my site (I did mention that this campground catered to RVs, no?) and went off to take a shower.

Oho! The hot water, I gathered, doesn't come on until the camp's official 'opening' time of 7 AM. Not that I can't take a cold shower, but after a night in a wet tent, just getting wetter and colder for the sake of being by myself in a car for a few hours was unappealing. Doc Bronner and I cleaned my naughty bits and jumped out in record time.

And that was it. Dressed and on the road by 6:30. Back to 91, south for twenty minutes, and then east towards New Hampshire.

Next: Land of Flannel
Posted by Dave Kopperman at 2:02 AM