Party of the Second Part

Okay! It's more Vomit Comics! If you missed it, check yesterday's Rambler for an explnation. Otherwise, let's dive right back into the puke pool! 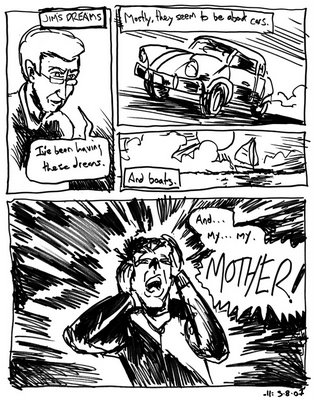 This one is both kind of stupid and also very, very stupid - it's two totally different kinds of stupid.

Stupid #1: Obviously, the joke itself doesn't pan out. The punchline is supposed to be calm guy freaking out with oedipal complex that reveals itself to him in his dreams. Ha, ha: sex dreams about mom.

Stupid #2: Because the drawing of the random guy in the first panel looked to me like my friend Jim, I just named it after him. If I'd thought about it for more than half a second, I wouldn't have done that - because Jim's mom was seriously ill at the time. Meaning that not only is the original non-punchline lost, it now seems like some weird thing about this specific Jim and his sick mother, which is not only stupid but really, really tasteless.

Curiously, a few months earlier, my own mother had been sick, and that undoubtedly played some hand in the subconscious life of this page.

I will say that I like the drawing of the car. 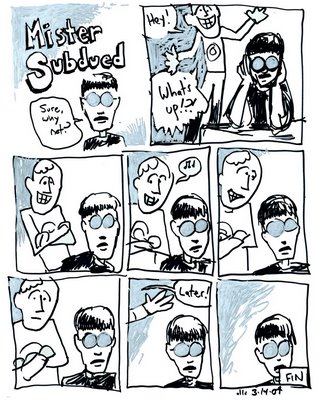 I have to admit, this one cracks me up.

I was aiming for something a little more stylized in this one - really trying to push to get out of my normal doodle style into something more graphic. The addition of the Silver Sharpie does more for this than any of the actual drawing.

Mr. Subdued himself is probably an ode to Peter Bagge's early comics, which in turn were homages to Crumb's earlier work. I'm guessing that doesn't come across. It's hard to ape perfection in 15 minutes.

Mr. Subdued also bears a passing resemblance to my ace pupil, Kalliope Dalto. She'd just been to a Trek convention and gave herself a Spock bowlcut. I only bring it up so that I can say: watch out for the name Kalliope Dalto. She's going places. Of course, she's only 12, so it won't be for a few years yet. 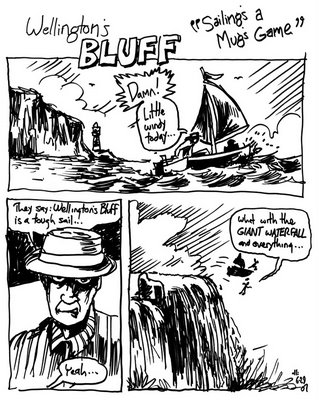 The first Vomit Comic from the third round of classes.

More boats. I'm thinking this is me telling me I really need a vacation.

Also, this reads like the worst Tony Millionaire comic ever. Sorry, Tony.

Someone had mentioned Newton's Second Law of Thermodynamics to me just before class, so it was on my mind.

The joke - which is pretty opaque, I'll grant - is based on a new-ish Cosmological Theory that states that the big bang isn't a singular event, but something that happens over and over and over.

Of course, it doesn't follow at all that the same universe will keep being recreated - same history, same timeline, same conditions, same everything - but I'd caught ahold of that theory a couple of years ago and it sparked a sci-fi/superhero story in me that uses just that interpretation. So this page takes it from there.

A better punchline would be that God hates you so much that he keeps recreating you just so you can die all over again, but it didn't occur to me at the time.

I'm aware that I misused 'infinitesimally,' but what do you want from me?

I love 'em. I think it's some of the best stuff you've ever done. Are you going to do a mini-comic of them?

I hadn't specifically thought 'minicomic,' but that's not a bad idea at all. I'll need about 16 more, though.

Vomit Comics is probably the title, no?

not so bad, nice drawing

Did Tony Millionaire actually say that?

I'll take a leap and assume, 'yes,' (isn't it pretty to think so?) and reply, wow, thanks. I'd like to say that my drawing would be improved if I hadn't set myself a 15 minute time limit. Likely not.

And John, yours will be a pull quote, too...