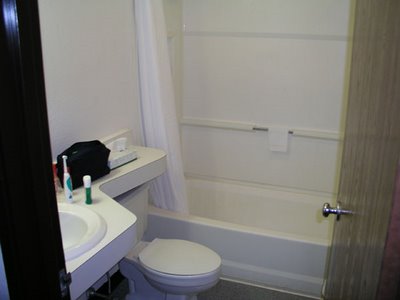 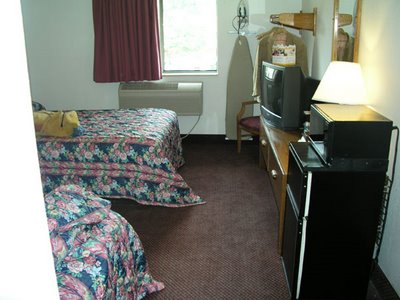 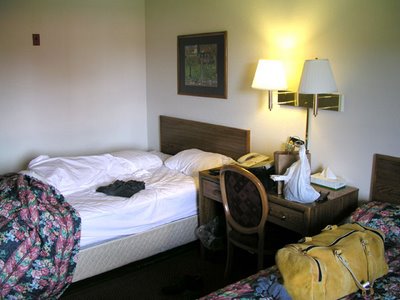 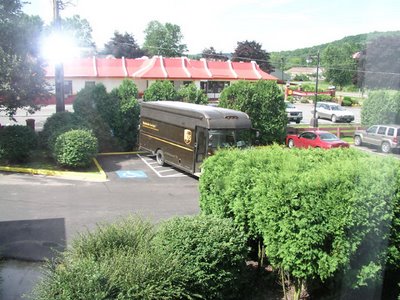 There - my Brattleboro Super 8 Motel room and the McDonald's opposite my window. How's that for newsworthy photos. I'm glad the camera at least held on for that, lest these memories be lost to history...

....note the faux Grandma Moses above the bed? How about the ledge over that toilet that guaranteed that the seat would try to fall down while you urinated? These are the details that historians of the W. years will be clamoring for.

Blissfully, the further North I drove, the fewer symbols of corporate America there were. Indeed, since the Super 8 was in the sprawl section of Brattleboro just off 91, the town itself was much, much cooler. Realizing I'd forgotten a few things - pillow, waterproof matches and a tarp chief among them - I went into town in hopes of finding some damn Wal-Mart, or something. Much better, I found a really, really great camping supply store in the old downtown area, right opposite a decent place to get breakfast. So I fueled up, got my supplies (plus a nice shirt!) and hit the road.

The Saturday leg of the drive was everything that the Friday night drive was not: exhilarating, fast, open, accompanied by beautiful, moody skies and increasingly dramatic landscapes as I sped North. 91 goes through the less developed Eastern part of Vermont, so it's mostly trees and hills, unbroken by large towns.

It only took me a couple of hours to reach Glover, and I pulled into the - well, it's either a parking lot or a field, depending on what season it is - and there I was at Bread and Puppet.

The Bread and Puppet Theater, for those who don't know, is the base of an art/homesteading/political movement founded in the 60s by German (or is it Polish?) born sculptor/dancer Peter Schumann. My thoughts on the whole Bread and Puppet experience will take up a longer entry later on, but in brief: the name of the organization is refreshingly literal. They have some giant puppets that they use to serve up a statement of some kind (it's not to difficult to guess that the protests fall towards the further left end of the political spectrum), and then they serve up some bread - cooked by Mr. Schumann himself - spread with garlic aioli. The value of the art is open to the individual viewer, as is all art. The bread and aioli are just empirically good.

Sometime later - in the early '80s, they added a manifesto of some kind called the "Cheap Art" movement. I confess that the details of this were a little vague to me, and it did seem sort of tangential to the central mission, but when an art community - I can think of no other way to describe the place - has been around for as long as B&P has, they have to mutate or wither.

Used to be that they held a once a Summer Pageant that apparently rivaled Burning Man for draw. But it got out of hand, becoming more of a hippie drug weekend getaway event, until the original mission was lost and, perhaps not coincidentally, one of the attendees was killed at a nearby campground in 1998 - a father of four, no less. I have to say, I'm very heartened by the fact that Schumann and his group were so appalled by what had happened and the general tone that the thing had taken on that they decided to scale back the summer events. Much to the chagrin of local businesses, of course.

At any rate, their overall mission - from political goals, to homesteading ideals, to business practices, can be found in not too much depth at their site. I understand that a two volume history has been written by the grandson of Bertolt Brecht, of all people, but I haven't seen that. And most of my RISD fine art friends and culturally aware friends from Northern New England had either read extensively about the movement or visited at some point. But not me.

In fact - up until last weekend, I'd barely heard of the place. My college friend Kate - a participant in the internship this year along with her foster daughter, Rebecca - had mentioned it to me in passing a few years back, but it was one of those things that didn't register with me. Mostly because, well, I'm not into puppets and art as theater is something I have little taste for. So going to see was more of an socio-anthropological journey for me than an exploration of their art.

Anyway, as I said, I'll get much more in depth with my observations and reactions to Bread and Puppet in a couple of days. It's complex, to say the least. For now, the basic chronology:

Leaving my Subaru cooling in the parking field, I walked back down to the 19th Century farmhouse and barn that comprises the B&P homestead. All the interns were sitting out back of the house, in some kind of discussion, so I waved to Kate and made off for the museum. The museum is house in the old barn, which is easy to picture if you think of Elsetree Studios, or the Javits Center, except made out of rough-hewn lumber and about 200 years old. It's a big barn, I'll give it that. As soon as you enter, right up front is what I guess would be considered the museum store - and since the museum also reflects the Cheap Art Manifesto, everything available is hand-printed posters, wood block prints and the like.

The museum itself is more like a storage facility for their pieces, with room to walk around and look at them. The puppets themselves sort of defy description - the only description that kept coming to mind for me was 'Pre-Christian,' as if these were props designed for some film about Solstice Festivals on pre-historic Salisbury Plain.

Kate found me, and - as a big, lumpy guy with nothing better to do, I volunteered my services and helped carry a 15 foot papier mache and wood figure (complete with a crown of straw) down across the rolling fields. Rolling and damp, since the rain had apparently been going non-stop all month, and really only abated the afternoon of my arrival. The drop-off point was one of many old school buses painted Merry Prankster style that dot the farm. We were moving the figures in hopes that the weather would hold for the Sunday Pageant (a much scaled-down version of their old festivals). And indeed, the Merry Prankster bus had gone to ground right by a copse of tall, symmetrical pines that lined the edge of the forest, a natural cathedral that the parade runs through. Well, it had been planted, but you get the point.

I met here a few of the other interns, and noted: most were college-age white girls, crunch-style. An Australian brunette with half-bleached short cropped hair introduced herself as 'Bugs.' I really wanted to follow that up. In fact, I could have spent hours happily interviewing every member of the collective, in the spirit of my socio-anthropological bent. I mean, I exist as a perpetual outsider in society, but there's me being outside of a particular social group, and then there's me being waaaaaaay outside, and the social group that made up this year's crop of interns was that same social group I went to RISD with, and never quite found out what made the entity tick, either en masse or in constituent parts. Nice sweet people that you want to know, and, if you're me, coupled with a sudden social anxiety attack and need to run away very far and very fast.

At Kate's recommendation, me and my magnificent belly decided to go for a swim at a nearby lake, and since this was the first time the weather had really cleared enough to do so, she and Rebecca came along. Kate swam, but Rebecca stayed ashore, singing. Occasionally, a toot from her pitch pipe wafted out over the waters, but no matter how I strained, I couldn't hear her sing. Later, I gathered that she has a near crippling shyness when it comes to public performance, which I'm afraid I may have compounded. More on that later.

Now, the weather had cleared, but it was still pretty cool, and the water was cold, but it was actually quite nice. I'm assured that on normal days, the lake was quite clear (I think it may even have been named 'Crystal Lake,' but that could have just been land developer's hyperbole). We got out, and the girls went to some social event for the interns, and I went to try to find a place to set up my tent before the rain started up again.

Enough Rambling for one entry! The excitement continues - tomorrow!
Posted by Dave Kopperman at 11:41 PM