Beware of the Leopard

So: tried to record a few keyboard overdubs for the album tonight. But Logic started acting real strange, like. Guitar parts moving from the verse to the chorus. Overdubs disappearing altogether. Finally, Karl & I (the only PCMA officials present) just gave up, and left it for Karl to bring an earlier version of the song back from last Thursday, via Time Machine. Time Machine is Leopard's sexy new automated backup system. 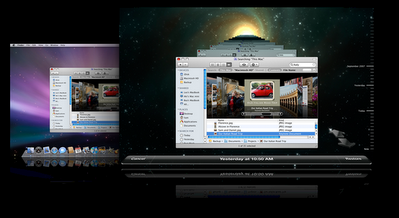 ...and I can only imagine it functions as well. I did do quick scratch vocals on all of the recent songs just this past Tuesday, but I'm more than willing to sacrifice them to retain the guitar that we got down on Thursday. But it does mean we also didn't get anything salvageable out of tonight's keyboard session, which is mildly irksome, especially when you consider that our ambitions were fairly low.

Anyway, Mac reamed us, but it also saved the day, so I guess all is forgiven, if not forgotten. Because the day it saved was last Thursday, not this one.

So it was a bad night. I think I can revert to a pre keyboard-recording version of the song and then import the audio tracks for the keyboards if they are clean. Hopefully last night wasn't a total waste.

For the record, I adore Leopard. And, we've learned the lesson millions of professional recording studios already knew, don't upgrade your OS on a production machine until the third party drivers are all tested and working.

Well, most studio engineers aren't in charge of technology for an entire school district, and can therefore afford to wait. You, on the other hand, pretty much have to buy the new Mac OS so that you can get a handle on it before the school adopts it.

The fact that you also really, really want to upgrade, aside...

I think the other lesson here is: if there's enough room, remember to partition the drive and keep the old OS running.