Putnam played a solo show in Manhattan tonight - I was originally going to catch the bus down to see it, but I ended up really mishandling my schedule today and instead drove, walking in the door about two minutes before he started playing.

Anyway, it was a good show, with Putt trading back and forth between banjo, guitar and mandolin. He got a singalong going with his banjo arrangement of the Stones' "You Can't Always Get What You Want." I tried to take a few pictures, but my crappy camera really couldn't handle the (rather nice) lighting situation in the club. I ended up taking shots only between songs, because I had to use flash, and I didn't want to mess up his performance. 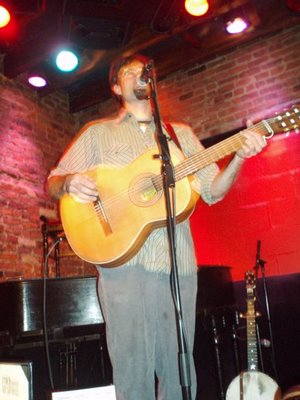 Afterwards, a few of us went out for beer and fish & chips, and then Putnam and Sarah came up here to spend the night - they're leaving for Portland this morning, where Putnam has yet another show in the evening. Crazy, man.