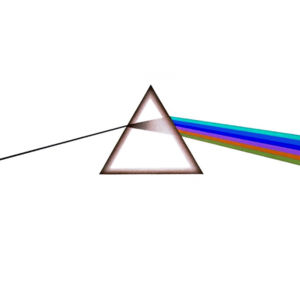 Tonight's winner of the "Write Dave's Blog" contest is Mr. Karl Tsakos, fellow aging crank. At my urging, Karl posted his counter-review of Dark Side of the Moon in yesterday's comments section. His review is essentially a review of my review, and a defense of my objections, so you should read my review first, and then come back here.

I'll be inserting my rebuttal to his rebuttal within his comments, so Karl will be italicized, and I will be boldfaced.

"You compelled me to comment on my blog, so I will:

It is clear from your life (I jest; we're friends) and your review of this album that you clearly are not a fan of anything successful. Otherwise your review of the album that most likely introduced you (I think you have made comment to that end) and most of the world to the band would be treated a little kinder."

Believe me, you're not the first person to accuse me of this particular prejudice on my part with Pink Floyd, so it may be something that I'm not aware of. Although the twins said it was because I like to champion the underdog - to an almost perverse degree - and that my preferring Dogs (for example) over every other track on Animals was because I just liked sticking it to Waters and chose that track just because it's the only one that Gilmour had any input on, rather than because of any aesthetic judgement on my part.

I think that my fairly negative review of A Momentary Lapse of Reason probably puts that idea to rest.

As to my 'not being a fan of anything successful,' uh, what? Have you taken a look at me DVD/CD collections lately? Just to look at my bookshelf shows that I'm, if anything, embarrassingly mainstream in my tastes. You won't find more Stephen King in the Library of Congress - and, boy, is he ever underground, let me tell you! As someone who defines himself as an artist, I confess to always feeling a little frustrated that my tastes don't run more to the avant garde, but there it is.

Also, Animals got a positive review, and Wish You Were Here is going to get a total fellating from me when I get around to reviewing it (I love that record), and those records were both hugely successful. So trust me when I say that the reasons I state for disliking Dark Side - the underwritten quality, the sameness of the tempos and compositions, and the guests getting in the way of the band - are as true as I can make them.

"I think it is fair to say that if Floyd didn't have this breakout album, the same album where they developed the Waters sound that maintained them through their most successful years, they would have been a musical footnote."

That's only partly true. They certainly wouldn't be at the level they're at now, but they were already a more than successful band even before Dark Side. In the UK, A Saucerful of Secretswent to number 9, Ummagumma went to 5, and Atom Heart Mother went to number 1! And, oddly, even American radio was starting to play them, with Free Four being something of a hit and getting Obscured By Clouds to number 46 on the U.S. charts - which is pretty impressive for a soundtrack to a film that wasn't even released in this country. So I pose that Floyd would have continued growing their success - but even if not, given my large soft spot for the British Psych/Acid/Prog era, I'd still be a huge Floyd fan - only I'd have to explain to people who they were, and not have to defend that passion to music snobs who sneer at the mention of the name because of the image that albums like The Wall ended up permanently associating with the band's name.

"Their early experimental stuff is great, but not sustainable for a mass audience of which you are a member. In other words, had you not heard songs from this album on the radio and become interested, we as an audience would not be reading your reviews of their collection. I'm just saying, I don't believe your feelings for this album have always been the same as you describe them."

I was indoctrinated in Floyd not through radio, but through the Big Brother's Basement Record Club, courtesy of the aforementioned twins and our mutual friend Rich Clarke, whose older brother had a seriously cool record collection. A bit heavy on Rush and Rainbow for my tastes, but that's where I heard all these records for the first time, mostly in my junior and senior years of high school - with Meddle cemented as my favorite very early in the running. By the time I was a freshman at RISD, I already had the complete collection on CD, and even by that point had grown tired of Dark Side.

"I do notice, 2 out of 3 times, when there is a lull in band practice you pull out a Floyd tune. And, 3 out of 5 times it will be something from Dark Side. Okay, probably one of the 4 songs you mentioned loving the most. Actually, there have even been times where we do 2 to 4 of the songs in order from the album because you keep going."

Oh, no denying I can play this album cold. I have the lyrics memorized, too. And the songs are fun to play - mostly because they're (as noted) incredibly simple.

But the main reason that I keep defaulting to the songs from Dark Side is the general air of crankiness and discomfit that comes from the band when I try to play material I prefer - such as Shine On You Crazy Diamond, or (my favorite song ever) Echoes. After all, when Copper Man was given the opportunity to play at Arlene's Grocery's "Classic Album Night," I went with Meddle* - which obviously shows that my own personal tastes will get the better of what little self-promotional moxie I have every time.

You'll note that the only two songs from Floyd that are part of the set are Fearless and Free Four (and don't forget Opel!). Make of that what you will.

And for the record, the songs I usually toss off are Breathe in the Air and Time.

"I'm just saying, I think you're not being honest with yourself."

Probably not, but what else is new?

"Personally, I didn't really 'discover' this album until a year or two ago as I was going through and identity crisis. Okay, a midlife crisis. (Technically, I am entering that arena.) Of course I knew and owned the album, I just hadn't given it much time or thought. I discovered two things from repeated listening of the album.

1) It works as a whole, continuous piece. Truly an album which is something we are loosing today. Many artists (unlike our humble host, Mr. Rambler) have forgotten the value of a related group of songs strung together. For me, who is neither stoned, nor (sadly) getting laid, nor both. Sigh. I find the pace and feel of the album just right. I do not have a feeling of sameness across the album but a feeling of continuity. Also, I am a fan of the reprise, so I don't have any issue of a theme, especially one that works, cropping up and tying the album together."

Oh, it certianly works as a continuous piece, and I can't deny that my own feelings about making an album that doesn't get too far out of a certain feel were hugely influenced by this record particularly.

"2) Back to the midlife crisis thing: Time damn near ruined me. If you are getting older, evaluating your life, and coming to the conclusion that you have just coasted along and never realized that time is passing and this is the only life you get and you are aging into the realm where you have passed the opportunity to do certain things, don't listen to this song. That damn line about 'No one told me when to run / I missed the starting gun' just kept going over and over again in my mind. It was on this album that Waters showed his brilliance at writing in simple language and conveying so much. Although he says he was just trying to do what Barrett did, he clearly found his own voice here."

I did say that I think the lyrics are excellent on a song by song level, but it tends to fail on the level of being able to make a really deep statement when they're all strung together. I think that Waters himself felt that, since you'll note that the lyrical focus of later albums got narrower and narrower, up to The Final Cut, which is just about the death of his father and Waters' personal feeling of betrayal at the UK military action in the Falklands.

"So my review, to completely counter your review, is this album is multi strontium (I think it's gold, platinum, rubidium and then strontium) for a reason. It's incredible production (more perfect then most of what I hear today), incredible musicianship, yes, the themes of the lyrics, and even the use of spoken clips over the very nice solos make this album deserving of the praise it has received over the years."

I think the crux of my review was that in order to achieve the monster, LCD success that Dark Side brought, they had to sort of tone down all the things that made them unique as a band and make themselves more radio friendly. That's why I referred to the album as the 'Disneyland' version of Floyd. Everyone loves Disneyland! Me, too! But I'd much, much rather go to see Fantasia, instead.

"But that's just my opinion."

Indeed, and welcomed! This finally gave me an opportunity to discuss some of my personal history with Floyd that I've been excising from the other reviews. And hopefully your equally valid take on the album will give this experiment - the stated goal of which is a proper reevaluation of the entire Floyd studio catalog - more weight than I alone can give. Keep arguing!

*For anyone interested, the complete Meddle show is online, here, played by the then Copper Man line up of Ansley Lancourt on Rhythm Guitar, Bran Lancourt on Bass, Edz O'Leary on Drums, myself on Keys, and Eric Santaniello on Lead Guitar.

In advance, I warn you that the vocal mix is wretched - I wasn't in great voice that night, but I swear it sounded better than that in the room! - because the mix came right of the desk, pre F/X. There's a second track mixed in, from Eric's Mini-Disc recorder, but it's not enough to soften the vocals to my (or anyone's) satisfaction.

Of course, the fact that Ansley's vocals sound infinitely better than mine on Seamus and The Gold It's In The... is purely a coincidental trick of the ear. Really.
Posted by Dave Kopperman at 9:27 PM

First, my apologies for writing a comment which was almost as long as the original blog. I started writing one or two snide comments and it got our of control.

Second, Not everyone loves Disneyland. I can't stand amusement parks.

Third, I expect royalties for being the basis of today's entry.

Finally, I look forward to your review of Meddle as we both love the album and our discourse on the minutia of the album could prove to be very entertaining (to us). Keep up the excellent reviews.

Disneyland may not have been the best analogy, but you get the point, I think. Mainstreamed for the masses.