A little over a week ago, my ace student Kalliope mailed me a hardcopy of a short story she'd written - a piece set firmly in the Lovecraft world. Then, a couple of days ago, another envelope came from her - with the exact same story in it. Well, I thought it was the same. Since she didn't include a note in either envelope, I had to dig, and upon closer reading, I found that there were some changes to the conclusion.

Anyway, I figured her sendng it to me twice meant it was time for me to respond. So while Yesenia completed her homework this morning, I sat me down and wrote a letter. I'd put it off for as long as I'd had because I wanted to include a thumbnail version of the entire story (it's only three pages, but) in comic form, since I'm trying to encourage Kalliope to continue with that. Fame and fortune and the calling of a true art form, that type of thing. But as I wrote this morning, that fell by the wayside, and I just talked about the wiritng and encouraged her to create a comic version herself. I did, at least, include a quick sketch for her, so I felt less guilty when I sealed up the envelope.

And here's the sketch: 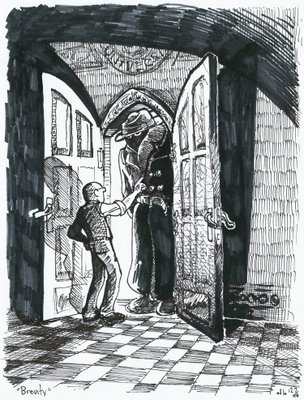 The story details a late-night encounter between a literature professor and an otherworldly visitor at the Miskatonic University library. After Kalliope gets the letter back, I'll ask her if it's okay to post the story here in one entry. It's darn good, I should say - better than my sketch would indicate.