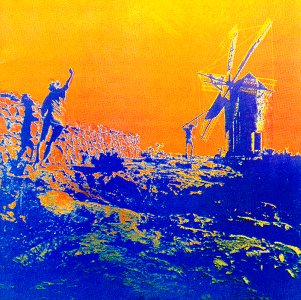 Note: I've decided to eliminate record company info because it gets confused as to who released what - and Floyd's journey through the music industry is only going to be touched on in my review of Wish You Were Here.

Here's a review that's more about avoidance than anything else: I'm avoiding writing the review for Atom Heart Mother that's been on deck for three days, AND I'm avoiding wrestling with ActionScript, although the Flash window is open behind this and if this review shows any signs of getting sticky, I'll jump ship and post it where it lands.

This evening's Floyd entry is one I have a lot of affection for - an odd, out-of-the-way album, one that's so much neither here nor there, it's amazing to consider that it's the first full LP for the Floyd line-up that would go on to become one of the biggest musical acts ever.

So: Barrett is gone for real, and Gilmour is fully on board. The pieces are in place. And where did they start?

By scoring a movie, of course!

More is more difficult to review as an album than their other full-length soundtrack, Obscured By Clouds, since with the latter, they essentially just recorded what they felt like, whereas with More there was more external control for them to turn in a genuine film score. To that end, fewer than half the 13 tracks that make up this LP have lyrics - and the instrumentals (a true Floyd staple) are also distinct from the normal Floyd variety in their brevity.

Typical period Floyd jams tended to stretch out to fill whatever space the band's dramatic arc demanded, whereas the loose instrumentals on (in?) More all clock in at scene length, around two-to-three minutes apiece. These are more structured than the extended jams of the period like Careful With That Axe, Eugene, which generally feature everyone in the band taking point and playing solo sections, like a traditional jazz number - or at the very least, feature extended soloing from Barrett/Gilmour and Wright together.

The More numbers are much more clearly more set up around a single instrumental sound, and generally strike a mood and hold it, without dynamic changes. Rick Wright plays the chief role in this, having more sounds at his disposal than anyone else. Although he hadn't yet moved on to synths or even the Hammond or any electric piano, between the acoustic piano and his way around the Farfisa, the gamut of tones is quite impressive.

They even find some way to cut all the attack from the Farfisa signal for the Main Theme, giving it a sound like a curious violin - and given the way Wright's Middle-Eastern flavored noodling (which the band called "Rick's Turkish Delight") play off against Mason's bongo-like tom patterns, Waters' looping bass and Gilmour's very sketchy slidework, the whole thing takes on a very effective meditative quality, although it does have an almost dervish-like tempo:


The piece is reprised at the end of the album, this time under the name Dramatic Theme, and, true to the name change, they play it with a much more deliberate pace, and without any real keyboard to speak of. Instead, Gilmour solos through the piece, giving the first real taste in the Floyd catalog to this point of the sonic template to come - minor key jamming with a trebley, reverbed blues based guitar carving out perfectly placed riffs on top. It also makes for a stark contrast in Gilmour's playing from the preceding track, a fairly credible piece of flamenco called A Spanish Piece.

What's more interesting is that the instrumentals run a very wide range of styles. In addition to the aforementioned flamenco, Up The Khyber is more free jazz than anything else the band ever recorded, essentially a piano/drum duet, with Mason setting up a furious snare, tom and ride tumble that Wright lays down atonal piano hits colored by Farfisa runs. Party Sequence (which I can only imagine accompanies an actual party in the film) is just hand drums with a wonky descant recorder - at least that what it sounds like.

The band even stays in the experimental mode with the track Quicksilver, accompanying various drug scenes in the film - of course, acid being one of them. Scraped piano strings, gongs, vibraphone and Farfisa shift ominously around each other, floating in and out of the roomy mix, occasionally borne away by odd and unidentifiable sound effects (none of which are audible in this short excerpt from the film):


Five of the six vocal compositions are credited solely to Waters, and they're the first signs of the craft he would bring later on. One can't be sure if it's the abbreviated time frame of the writing and recording a project like this has, or just general design, but the songs all have a very simple verse/chorus/verse structure, often followed by a playout, and the chord structures are simple, rarely more than two or three chords to a song.

I genuinely love all the 'song' songs on More - again, the structures and melodies are simple but beautiful, and the band strokes them with such a gentle hand that a fragile, shimmering haze forms over the pieces - but my favorite is Green is the Colour, a lilting acoustic ballad that Gilmour sings in the most heartbreaking falsetto known to man. Three simple verses that lyrically seem to chronicle one man's fight to refrain from falling in love (well, lust) with a beautiful woman, even as he knows he's lost to her already. The whole feeling of joyful melancholy (or melancholy joy) is punched through even more poignantly by the return of the recorder (played by Nick Mason's wife Lindy) throughout. The track also builds in a soft fashion, never getting too intense, but starting from a dual-acoustic feel to a piano solo/recorder duet over the playout that's the closest that the band has ever come to some kind of country folk music, almost, in a very roundabout way.

The contrast between the open, airy happy/sad feel of this album and the airtight electronic doom of the later Floyd is nearly impossible to believe, but to the Floyd's credit, it is at least an organic change. Still - more of this kind of thing wouldn't have been such a bad thing, you know?

I'm going to block out a chunk of time, make a large cup of tea and read your entire Floyd analysis from beginning to end.

Still, I'm only a quarter of the way through - and at this rate, it'll be about a month before I get to all of them. This reviewin' is thirsty business.