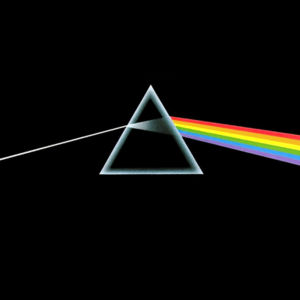 What can I possibly write about this album that hasn't already been written before? Let's face it - less has been written about the actual dark side of the Moon than the album that bears its name. When something is famous enough to be considered worthy of having its own midnight Lasarium show at the Hayden, chances are good that anything I have to read into the record on it is going to be, at best, completely non-essential.

And you know something? That's just one of the many reasons why - in the words of Road Manager Peter Watts (Naomi's dad, no less) - "I can't think of anything to say!"

And I tried. I even sat in the tub with Yesenia by candlelight and ran it by her for her first listening ever, hoping that a fresh pair of ears would help.

But may I be perfectly candid? This album bores me. Not enough to bore me silly and be a source of real annoyance - it's too polished, too well-written and well-performed for that (too well-produced, engineered, arranged, mixed, etc.) - but just enough to raise nothing in me save a vast, 45 minute long sense of "Meh."

And, curiously, it always did. One thing I'm discovering as I work my way through the catalog is that my feelings about the Floyd and their work have pretty much been as they were since the moment I started listening to them, exactly twenty years ago by this point. I was always very excited by the early experimental work and really not nearly as much into the big, commercial albums. There are a lot of reasons for this - and you can probably glean most of them from careful readings of my Momentary Lapse of Reason and (to a lesser degree) Animals reviews - but it's mostly summed up in the fact that I like the journey more than the destination.

Dark Side of the Moon suffers from this more than any other album in their catalog. In many ways, it's almost like a Disney ride of a Pink Floyd album, with the lyrics superbly honed to communicate to the largest audience possible, and the work of the band frequently made to play second fiddle to some very talented guest players. A Pink Floyd album with only three guitar solos? Sure - Time, Money, and Any Colour You Like. The album should be subtitled "Dave Gilmour's Day Off." Too, the band also is just made into sonic wallpaper for the sound bites of stoned roadies talking about giving people 'short, sharp shocks' and the like. All well and good, but when Rick Wright's only (quite lovely) piano solo on the entire album is kicked aside in favor of Roger the Hat talking about 'frashing' people, you've got your priorities on backwards.

Floyd set out to make an album to crack the charts, and they did so spectacularly. You're always hearing how it's sold umpteen dozens of millions of copies, sales surging every time it's released on a new format, how there was at one point a factory in West Germany that was given over entirely to manufacturing copies of the damn thing...

...and blah, blah, blah. That brings us to problem number two, which is that the thing is so ubiquitous a cultural item that you can't get your brain around it. When people talk more about the thing than the stuff (if you know what I mean), it's a problem. But I think I'm immune to most of that. Since 1988, I've listened to every album that preceded Dark Side more than it by a factor of ten - and I really can't recall the last time I did listen to it, or felt like listening to it. Again, even back as a teenager, I immediately went right for the early records and found that my initial interest in Dark Side and The Wall was, frankly, down to peer pressure. "Everyone says they're just brilliant! So I think they're brilliant, too!"

Well, sure, they are. And fucking boring to me. I think the lyrics are great in micro but strung out across the album as a whole, they wear - and in no way does the loose concept of 'here's all the stuff in modern life that'll drive you crazy' touch me. Sure, time, and money, and war, and death, and drugs, and, uh... airports... are fascinating subjects, but how could you do any one of them justice with even a double album? The album message is primed to fail when you realize that you're not getting an in-depth examination of these topics - you're only going to browse the index.

And musically? Beyond the playing - which is great, of course, polished to a bright sheen by the much-ballyhooed method of playing the album live for several months before recording it - the compositions are all very samey (as Yesenia noted). Very mid-tempo, very much the same instrumental sounds throughout. Which certainly makes sense when you consider the album as a piece - and a live piece, at that - rather than a collection of songs.

And added to the constant tempo is the same general harmonic structure. Breathe in the Air gets not one, not two, but three reprises,* giving almost a third of the album over to the same two chords, repeated endlessly. Compositionally, the only bits of interest are :

And the rest? Not so much. The melodies all have a tendency to hang on one note - not a crime, but when nine songs in a row do that, it begins to get tiring - and the dynamics are almost as cliched in their use of soft verse/loud chorus (or vice-versa) as your average Nirvana rif-off band.

Vocally, Dave Gilmour carries the day here, to the effect of rounding the sound off even more. Sonically, it's just not a challenging record - it's meant to sit in the background and groove while you get stoned, or fuck, or do both, or skip it and just cut to staring off into space. It's practically ambient music before Eno came up with the concept. And what's odd about that is that the Floyd of just a couple of years earlier really did lay down aimless, wordless ambient noodles, that ironically are far more gripping to listen to than this album.

Still, I'm sure that as a live show - what with the dry ice and the animated clocks and the airplane crashing to the stage - it was something else. But then they had to go and cage it to show everyone. Best to leave these things out in the wild, where they belong.

*All right: the change is the Em7 to A interval, which makes up 1) Breathe and 2) its official reprise, plus 3) the mid-section jam in Great Gig in the Sky, here transposed to Gm7, and Any Colour You Like, which transposes it to Dm7 - and really drives it into the ground.

**Yes, I'm aware that three of those four musical bits of interest are from Rick Wright. I swear that it's just a coincidence - inasmuch as it can be, when you consider that his sense of harmonics is a good part of why I liked - and like - Floyd in the first place.
Posted by Dave Kopperman at 10:07 PM

You compelled me to comment on my blog, so I will:
It is clear from your life (I jest; we're friends) and your review of this album that you clearly are not a fan of anything successful. Otherwise your review of the album that most likely introduced you (I think you have made comment to that end) and most of the world to the band would be treated a little kinder.
I think it is fair to say that if Floyd didn't have this breakout album, the same album where they developed the Waters sound that maintained them through their most successful years, they would have been a musical footnote. Their early experimental stuff is great, but not sustainable for a mass audience of which you are a member. In other words, had you not heard songs from this album on the radio and become interested, we as an audience would not be reading your reviews of their collection. I'm just saying, I don't believe your feelings for this album have always been the same as you describe them.
I do notice, 2 out of 3 times, when there is a lull in band practice you pull out a Floyd tune. And, 3 out of 5 times it will be something from Dark Side. Okay, probably one of the 4 songs you mentioned loving the most. Actually, there have even been times where we do 2 to 4 of the songs in order from the album because you keep going.
I'm just saying, I think you're not being honest with yourself.
Personally, I didn't really "discover" this album until a year or two ago as I was going through and identity crisis. Okay, a midlife crisis. (Technically, I am entering that arena.) Of course I knew and owned the album, I just hadn't given it much time or thought. I discovered two things from repeated listening of the album.
1) It works as a whole, continuous piece. Truly an album which is something we are loosing today. Many artists (unlike our humble host, Mr. Rambler) have forgotten the value of a related group of songs strung together. For me, who is neither stoned, nor (sadly) getting laid, nor both. Sigh. I find the pace and feel of the album just right. I do not have a feeling of sameness across the album but a feeling of continuity. Also, I am a fan of the reprise, so I don't have any issue of a theme, especially one that works, cropping up and tying the album together.
2) Back to the midlife crisis thing: Breath damn near ruined me. If you are getting older, evaluating your life, and coming to the conclusion that you have just coasted along and never realized that time is passing and this is the only life you get and you are aging into the realm where you have passed the opportunity to do certain things, don't listen to this song. That damn line about "No one told me when to run / I missed the starting gun" just kept going over and over again in my mind. It was on this album that Waters showed his brilliance at writing in simple language and conveying so much. Although he says he was just trying to do what Barrett did, he clearly found his own voice here.
So my review, to completely counter your review, is this album is multi strontium (I think it's gold, platinum, rubidium and then strontium) for a reason. It's incredible production (more perfect then most of what I hear today), incredible musicianship, yes, the themes of the lyrics, and even the use of spoken clips over the very nice solos make this album deserving of the praise it has received over the years.
But that's just my opinion.