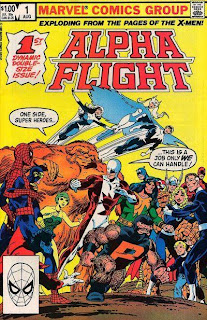 It occurred to me that it was time to start a new recurring feature here at the Rambler; enthusing about comics I have enjoyed.  I'm going to keep it flexible - an appreciation can be anything from a single issue to an entire series, and anything in between.


This inaugural A.C.A. is about Alpha Flight, specifically issues 1-28.  Alpha Flight was a group of Canadian superhero characters that first appeared in a 1980 issue of X-Men - specifically designed by creator John Byrne - himself Canadian - merely as a team that could 'survive a fight with the X-Men.'  The back story is that Alpha Flight is a branch of the military, and Wolverine was originally part of the team who went awol to join the X-Men.  The Canadian government, having poured untold resources into his creation, sends Alpha Flight to reclaim him.


Wolverine doesn't return with them, and by the time Alpha Flight's own comic premiered, the government funding had been cut off and the team was officially disbanded.


What followed was one of the oddest superhero comics of the 1980s, a decade where superhero deconstruction was the norm.  Alpha Flight preceded Watchmen (by Alan Moore and Dave Gibbons) and The Dark Knight Returns (by Frank Miller) by a few years, but was also part of the era's thematic shift away from the 'what' of superheroes to the 'why' of them.  The difference between Alpha Flight and the other two books (beyond their being substantially more famous to the general public) is that, while Moore and Miller on some fundamental level thought superheroes were silly, John Byrne unabashedly loved them.  But he also spent a lot of time thinking about the 'why,' and that's the fundamental core of this book about a 'team' that rarely met or acted together.


My reasons for loving Alpha were that it was very different from anything else on the stands. Quieter, more introspective.  Most of the action took place in the middle of nowhere, making the stakes to bystanders minimal, but the stakes for the heroes much higher.

It also looked different, with open space and forests - as close to a classic western as any superhero comic has ever come.  It was more serialized internally, less tied in to Marvel continuity, and there was real character growth and change.  White, anglo-saxon and even heterosexual men were in the minority on the team, and the views into other cultures and traditions were treated realistically and matter-of-fact, rather than some kind of curiosity.

Money problems were real, and the solutions were never perfect, permanent or effective.  Interpersonal conflict was an organic outgrowth of the characters, not tacked on to add flavor.

Tonally, with the longer character arcs and naturalistic dialogue, it shares a lot with the alternative comics of the early 80's, and served as a bridge to those titles for me.  In many ways, it's the book that changed me from an young adolescent reader of superhero comics to a fan of the form of comics, and the idea of comics as something that could be enjoy in much subtler and more 'adult' ways - and it did so without the gratuitous violence and sexual boundary pushing of Watchmen and Dark Knight.  In a lot of ways, the violence in Alpha Flight has much more consequence than in those books, and certainly more consequence than in any other contemporary title I can think of.

On top of that, it was a book with an almost zen stillness in places, which ran not only counter to the rest of the mainstream titles at that time, but seemingly the rest of American popular culture.

And it hasn't dated as a read!  If ever there were a self-contained title/run that can be re-experienced in comics, it's that.  It's like the Chronicles of Narnia of superhero comics, minus the Christian allegory (at least not one that I got).

I just realized that I wrote all that without once saying anything about the art, which is a testament to just how good the writing is. Obviously, the art was - to my twelve-year-old eyes - fucking awesome, and it's still stellar.