As a child of divorce, you become very aware of the various pitfalls any marriage can go through. Perhaps, at some core level, you even think that the natural course of events is to have a failed first marriage, and then a long and successful one following. If you're feeling really pragmatic, you might think that the second marriage is more based on compromise, companionship and practical needs than love.

But what really floats around in your head, if you're a child of divorce like myself who is now in the age group where most of my friends have married off, is the question of 'who's going to be the statistic?' In other words, whose marriage isn't going to hold?

Turns out it was one of the earlier ones, being my college friend Sayonara* and her husband, Pinocchio.* And it was an interesting case, because it was also one of the least-traditional marriages I've ever seen. But even given the slightly left-field nature of the coupling, they made it work for about nine years, until the differences they saw in their futures became too divergent. Pinocchio had long wanted to be a homesteading subsistence farmer, while writing plays and music and prose on the side. At first, that's what they perused, but Sayonara's desire to live and further her arts career in NYC brought Pinocchio to live in Brooklyn for a couple of really trying years. Eventually, he couldn't take it anymore, and - with other pressure on the marriage included - the two opted for an amicable divorce, with Pinocchio moving to Maine and Sayonara staying in NYC.

Pinocchio landed for the first year at a place called "The Bell School," just south of Bangor, and, short of any other information and knowing that a couple of other long-term guests lived there, I had an image of some kind of seedy halfway commune, in major disrepair of the electrical and plumbing variety. I discovered very differently last year when Yesenia and I drove to visit Pinocchio and discovered instead one of the loveliest homes I've ever seen - a living spread from Architectural Digest about beautiful renovations of the Yankee golden age, or something. 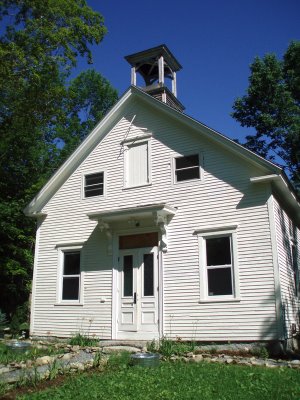 A young married couple had bought an 19th century single room clapboard schoolhouse and transformed it into a wet-dream of a home. And since the two were both artists and generous people - he, a writer and she a multimedia artists who runs her own quilting company - they like having a small crowd of interesting young artists to share the space with them. And the name "The Bell School" is accurate, but also a deliberate choice to keep calling it by its public name, even though it's now a private home. On our first visit, Yesenia and I have never felt more welcomed in a place, a feeling made all the more remarkable by everyone besides Pinocchio being complete strangers, and Pinocchio himself while being a friend, is still someone I have only known well for a couple of years.

So, when I went back to the Bell School this year, it was with both great happiness to return to such a lovely place and visit with such incredible people, but also a little regret because I knew I was basically blowing through -staying for less than 24 hours - when what I really wanted to do was hang out for week straight and generally make a useful nuisance of myself.

As noted, I met Pinocchio through my college friend, and the first time I met him was, in fact, at my own wedding. It wasn't until a couple of years later that I really got to talk to him, and found him an engaging guy. Like me in many ways, but with differences that make our interactions interesting - for both of us, I hope. A couple of years ago, he asked me to play bass on his record, which I was incredibly flattered to do. Pinocchio himself at the time was something of a Luddite, but has since embraced the usefulness of computers in pursuit of a D.I.Y. music career. Still, he was impressed enough with what little studio savvy I possess that he later had me master the album, which I was again flattered to do. I'd still like to record him, but he's afraid that I'd try to expand on the drums and bass and guitar that he had going on the record I played on, while he's heading back toward the antique bluegrass and folk instrumentation that he loves.

He's right, of course. At some point I'll drug him and get him to make the Sun Records style recording I want to hear from him, but in the meantime, his new record - recorded by a Bell School expatriate who had relocated back to Texas - is a really lovely collection of acoustic sounds, with just some gentle cello and rare pedal steel touches. He's gotten the thing professionally mastered, to boot, and is gearing up for a number of New England folk house dates, both solo and with a backup singer an a cellist.

The timing of my visit to the Bell School this year also deliberately coincided with a Shakespeare in the Park production of As You Like It which Pinocchio was directing - and which he moved up to a Civil War setting, so he could score it with more of that folk and bluegrass music.

All in all, a good way to forge a new path after the previous one with Sayonara had ended with no mutual way forward.

Anyway, I arrived at the Bell School at 1:30 PM, a little grimy and road beat, but thrilled to be there and to have brought yet more nice weather with me for another friend's outdoor show.

*Since everyone knows these are pseudonyms, I figured I'd just make them as obvious and silly as possible. Since I'm getting into that rare territory of discussing other people's private lives in depth, the change of name seems necessary. Apologies if it makes this entry a little weird. The Pinocchio in this story is not made out of wood, nor does he have a predilection for lying to keep himself out of trouble.
Posted by Dave Kopperman at 12:14 AM