Return of the Son of Vomit 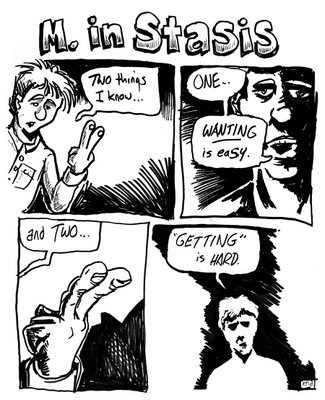 Well, the comic class is in swing again, so that means it's high time for the return of everyone's favorite recurring Rambler feature - the Vomit Comics! That's right - those fifteen minute wonders, the comics exercise that separates the men from the cartoonists, the completely obscure telegram from the unconscious, totally unfiltered and delivered right from your lizard brain to the page, because, hey, in fifteen minutes, who has time to think about what they're doing?

This entry is about as obscure as they come. I have no idea where the title came from, although at least I can see that it has some oblique reference to the strip; often, they have no connection whatsoever. Here, we can see that 'M.' is clearly having some kind of spiritual crisis. Presumably, this wisdom that he's come away with will help him break out of his current state of ennui.

Gee, I wonder if this is autobiographical in any way?

One of the students noted that the comic is drawn in (at least) four different styles. It's true, but it's not by design. That would take effort.

How many of those do you have?

About a dozen. I should have twenty altogether by the end of this class.

have you compiled them?

We could run one a week if you want..

Sorry to hear about Manon - but take comfort in the fact that that's a pretty long-lived cat! Frankly, I'm sort of surprised that she was still alive. I'm sure she was cranky to the very end. What's the status on the other cats? Did she outlast them all?

I'm planning on doing a mini-comic with the Vomit Comics when I get a decent amount together - maybe 24, plus four pages of notes and commentary (really a running self-critique). I don't want to do any promotion on it until it's available, though - I expect to have the thing ready in August, if the summer session runs.

They don't work for me as 'stand-alones' - I think they need the commentary to feel complete. Which is probably a sign that they're failures as comics, but if you consider the commentary as an irreducible part of the package, they get a lot better.

Maybe, when I get the mini done, we can run four strips altogether - one a week, each with the commentary, and an address to order? That would be grand.

Yeah we can definitely do that...

Yeah she was old, she was alive about half of my life.. I was still a teenager when we found her.. I feel mostly bad for my parents who have had to deal with so many of these now..

Gaston, Zora and Ratton still remain.. and then there were three..

its horrible when an animal dies, no matter how cranky..

disagree about them not working stand alone though.. kind of zen represented that way.. youre the artist though..

One is zen, but they quickly seem kind of lame and shallow in when placed in sequence.

We had Janet from 1981 to 1998 - and it was me that found her and brought her to the vet when she suddenly had her arterial thromboembolism. Traumatic, I tell you.

Yeah.. they were about the same age.. Manon was even older..